A Giveaway to Celebrate Ten Years Since ‘The Call’ 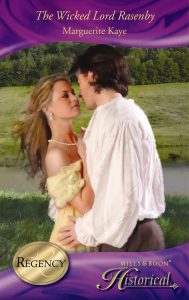 My first ever cover

I first tried my hand at writing a Mills & Boon romance when the initial glamour and excitement of my career in IT began to pall. How can that be? I hear you cry but trust me, life was never the same after the introduction of BS5750 (A Quality Assurance standard, for those of you who haven’t already lost the will to live).

Thankfully I remember little of my embryonic effort , save that my heroine was called Flora, and that she grew orchids for a living – which was the epitome of a white knuckle ride of a career as far as I was concerned at the time! There was an excruciatingly breathless sex scene set in the potting shed (picture a naked Gardener’s Question Time – no on second thoughts don’t, you’ll never look at a pair of secateurs without shuddering ever again). Not surprisingly, the only thing it produced was a very polite rejection letter from Romance HQ which I still have. I spent the next ten years expending all my creativity studying history with the Open University and then, when I got the opportunity to take voluntary redundancy, I leapt at it.

I enjoyed a (very belated) gap year, and since I was by then too old to achieve my ambition of being a ballet dancer (even though I could and still can do the splits!) I began to think seriously about writing once again, and sent off articles, short stories, recipes, travelogues, to anyone and everyone. And then I started the now familiar process of counting the days (more like weeks back then) until I heard back. In the early days, the rejections far outweighed the acceptances, but I persevered. 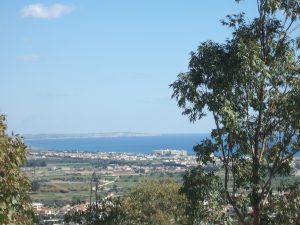 I was living in Cyprus at the time, and ten years ago, you still had to submit material to magazines and newspapers in writing. Cyprus is a lovely island, but the postal system is erratic – though not as erratic as the buses. The postman rode a scooter and threw the mail in roughly the direction of the mailbox if you were lucky – I once found a cheque for an article lodged in the bougainvillea. 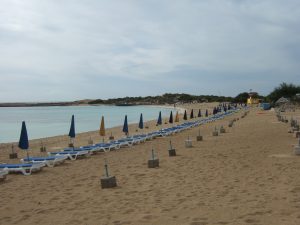 The beach where Kit and Clarrie were born

For some inexplicable reason it didn’t occur to me to try to write what I most loved reading – historical romance. I was lying on the beach one day, talking with my mum and aunt, who were out on holiday and who are both avid romance readers, when the idea for Kit and Clarrie’s story popped into my head and I thought – why not!

I sent the partial off to Mills & Boon and filled in the waiting gap with lots more articles. Then I sent off the full story when they came back to me, and this time occupied myself by writing another partial and sending that off too. And then my sister in London asked me to help fill a childcare gap, and I was far too taken up with school and nursery runs and weaving stories for my two nieces to worry about the fate of my two nascent romances. Until it happened. The Call came out of the blue. 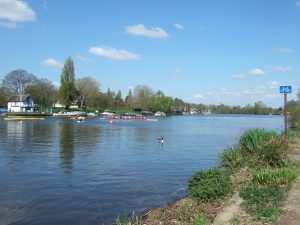 Except it was an email, because Linda Fildew, at the time in charge of historical, didn’t know where I was living. When she discovered that I was only a stroll along the Thames away from the Harlequin office in Richmond, she invited me to lunch. Walking into the building located on Paradise  Road (the real address), I was on cloud nine. I am sure it’s the same for everyone, but I couldn’t quite believe it had happened, especially when it turned out that they wanted to see a full version of my second partial too. I had to write furiously to finish the second book. My laptop chose that point in my fledgling career to die – of course it did! But not even that could spoil the thrill of knowing I was going to be an actual published author.

A year later, when The Wicked Lord Rasenby was published, that’s exactly what I was. Sometimes I still can’t quite believe what’s happened in the last ten years – and how happy and privileged I am to be able to write for a living. Of course there are times when a book goes horribly wrong – actually that always happens at some juncture – or when I have zero enthusiasm. But I just have to remind myself of the bad old days, when I wore a suit to work instead of pyjamas, and had a two hour commute instead of a few steps across the hall. Astonishingly, I’m currently working on book number forty-eight, believe it or not, and I am loving being a writer more than ever. 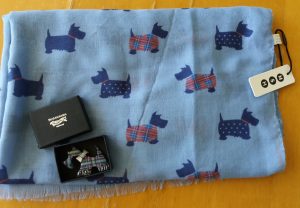 So to celebrate my ten-year milestone, I have a giveaway with a Scottish theme. You can win this Scottie dog brooch made by Skaramanda in Scotland, and a scarf to match. All you have to do is tell me what you think Kit is saying to Clarrie on the UK cover of The Wicked Lord Rasenby  at the top of this post. Feel free to be serious or funny, but please don’t be rude. Winner will be announced here on Friday 20th July.

Share this:
This entry was posted in Author Life, Book News and tagged Cyprus, Giveaway, The Wicked Lord Rasenby. Bookmark the permalink.