Oh Sister, Where Art Thou?

Wannabe writers are forever being advised to “write about what you know, write from experience”. As the eldest of four very confident and opinionated sisters (and three brothers too), it’s therefore not altogether surprising that I’ve written a lot of sisters into my books. Looking back over the last ten years and fifty books (50!!!!) I can also see that my fictional sisters partially reflect the evolving relationship I’ve had with mine – though only to a degree.

I started out with Clarrie, the heroine of The Wicked Lord Rasenby. As a responsible older sister, she steps in to ‘save’ Amelia from losing her virtue to the infamous rake Kit, Lord Rasenby of the title. Now I’ll say up front that I have NEVER had to do such a thing, but there have been a few times over the years where I’ve leapt in to rescue one of my wee sisters from a tight spot, whether they wanted to be rescued or not. And there have also been occasions when I’ve taken the rap for them too. One of my sisters (you know who you are!) was a past master at pointing the finger (quite literally sometimes) at others for her indiscretions. Talking of which, I would just like to put it on record after all those years that it was absolutely NOT me who smashed the milk jug! 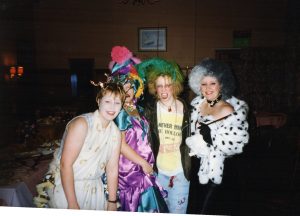 Hydra, Carmen Miranda, A Punkette and Cruella Deville aka me and my sisters

In a big family, you tend to get labelled very early on, and nothing you can do in later life will change that tag, as far as your nearest and dearest are concerned. If you’re the clever one (that’s me) then you can’t be the sporty one or the pretty one. I realise I’m making my sisters and I sound like the Spice Girls, which trust me we are not, although we do like a good curry.

In my Armstrong Sisters series, all five of the sisters struggle with the labels bestowed on them by their domineering father. This patriarchal horror of a man is rewarded for his appalling parenting by creating five rebels who take extreme measures to escape the fates he has planned for them to satisfy his burning ambition. I loved exploring the issues that each of the sisters had and their highly individual forms of rebellion. Again, I hasten to add that none of it is autobiographical, but it does reflect the ways each of my sisters and I have railed against family stereotypes, and refused to conform to expectations. All of us, for example, have radically changed our lives as we each hit our fortieth year (to become a writer, to retrain as a nurse, to launch their own business, and to start a family).

I love my sisters dearly, and one of the pleasures we all share now is that we’ve (mostly) outgrown sibling rivalry and become friends who enjoy each other’s company. Our girly lunches with our mum are now a regular feature, despite our busy lives and the logistical problems of geography, but it would be a mistake to think that we all know everything about each other. And that’s something else I have been exploring in my books. Celia, the eldest Armstrong sister, kept a huge secret to protect her younger sisters. (You can discover just what the secret was in the last book of the series, Unwed and Unrepentant, though even Celia didn’t know the full extent of her father’s duplicity, which I revealed in Claiming His Desert Princess). 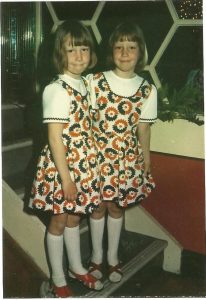 I continued to explore the ‘secret keeper’ theme in my Undone novellas. No-one could be closer than a twin sister, you’d think, but while having an other half can be incredibly rewarding, it can also be stifling – a shadow that you can’t shake off. I myself count identical twin sisters and twin brothers among my siblings, and while it’s a bond that fascinates me, it’s never been one that I’ve envied, for precisely those reasons. In Behind the Courtesan’s Mask, Titanic, A Date with Destiny and the Time for Scandal 1920s duet, my fictional twin sisters escape the bond by living very different lives, though the consequences are bittersweet.

And now, after a gap of a few books, I am back to writing about sisters and twins in my Penniless Brides of Convenience series. I have created an eldest sister with an over-developed sense of duty in Eloise, heroine of The Earl’s Countess of Convenience, but it wasn’t so much the whole sibling hierarchy I wanted to explore in this series, it was the way that the sisters’ upbringing affected them and shaped them, and how each of them experienced their shared history in different ways. Eloise steps in to protect the younger Twinnies (another label I borrowed from real life) from a very early age. She is the antithesis of her mother, whom she finds it impossible to love, and though it would be too extreme to say she despised, she certainly would never emulate. 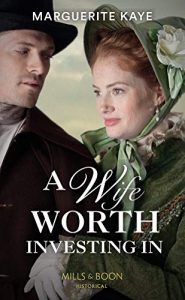 For Phoebe however, the youngest of the twins and the heroine of my new release, A Wife Worth Investing In, her mother was a free spirit, a beautiful creature who drew the attention of everyone the moment she walked into the room. Phoebe’s story opens in Paris, when she is (foolishly, as it turns out) trying to emulate her mother’s flamboyant nature, and at the same time to prove to her elder sisters that she is very much her own person, and not the baby of the family who needs mollycoddling. Poor misguided Phoebe!

Estelle, the other twin, is the heroine of The Truth Behind their Practical Marriage (out in November) and in this book I return to the whole issue of labelling and stereotypes. Estelle is the ‘musical’ one, but despite her sisters believing she harbours a lifelong ambition to play in her own orchestra, all Estelle wants is to ‘right’ the wrongs of her mother’s appalling parenting by having a family of her own. Not that she’d ever tell her sisters this though. I had such fun writing a scene late on in this book when all three of them realise they’ve been leading ‘secret’ lives from each other. 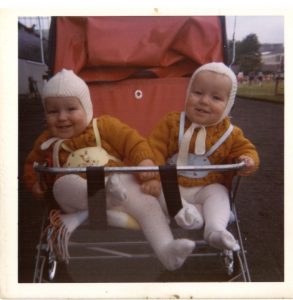 My other sibling twins! Armstrong brothers in the making?

Am I done with sisters now? I somehow doubt it, though it occurs to me, writing this, that maybe I should tackle brothers next.

For a start I’ve three of my own to provide some raw material. What’s more, if you take a look at the Armstrong Sisters family tree, you’ll see that there are also four brothers, including a set of twins, ready and waiting to be heroes. It would mean letting Lord Henry Armstrong out of his box though, and I’d sworn I had seen the last of the scheming old curmudgeon. What do you think, would an Armstrong Brothers series interest you?

Share this:
This entry was posted in Author Life, Book News and tagged A Time for Scandal, A Wife Worth Investing In, Armstrong Sisters, Behind the Courtesan's Mask, Claiming His Desert Princess, Penniless Brides of Convenience, The Earl's Countess of Convenience, The Wicked Lord Rasenby, Titanic, Unwed and Unrepentant. Bookmark the permalink.