Pizza (not so) Express!

When I was a nipper (we’re going back quite a bit here – so far that the internal combustion engine had just been invented) pizza was an exotic ‘foreign’ dish. There were no ready-made pizzas available in the supermarket, though you could buy frozen versions from McCain, which came in a stack of six, each about the size of a tea-plate and with the consistency of a beer mat. You could have any topping you liked, as long as it was cheese and tomato. Findus came up with a hybrid aberration called a French bread pizza, half baguette / half pizza which was as appetising as it sounds (I seem to remember the processed ham one being particularly vile). Today’s sourdough, artisan baked gourmet versions were very much a thing of the future. 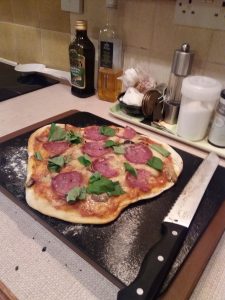 I tasted my first real pizza on my first trip to the States when I was 19. My uncle, whom I was visiting, suggested it would be prudent if I ordered the small margherita, while he went for the large marinara. Two waiters arrived bearing between them an enormous metal tray the size of a coffee table. I was just thinking how relieved I was to have taken my uncle’s advice when one of the waiters said “small margherita?”. It kind of traumatised me, so when the waiter asked me if I’d like to take home what I’d left (about three quarters of it) in a doggy bag, I told him that I didn’t have a dog, only a cat, and that I wasn’t sure they’d let me take it on the plane back to Scotland.

Back in Scotland, the Pizza Hut chain had opened, and while I much preferred the cornucopia of delights that was the salad bar in those days (remember Blue Cheese and Ranch dressing, bacon bits, Russian salad?) I was gradually converted to pizza, though the volume of crust still defeated me. 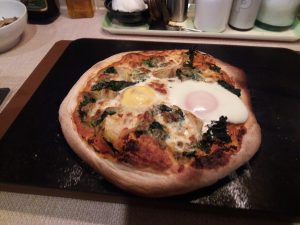 Spinach with Mozzarella and Egg

Then in the south of France one year, I discovered the delights of thin crust pizza topped with a runny egg. Like lots of folk, I wanted to recreate the holiday experience at home, and like lots of people, I used the short-cut of buying various pre-made pizza bases. The results were invariably disappointing. But making dough from scratch is such a palaver, it wasn’t until my mum bought me a stand mixer with a dough hook that I began the quest to make my own perfect pizza dough.

So, let’s talk about the perfect dough – or at least, my view on the perfect dough. Pizza is Italian, from Naples to be precise, so my first experiments were from my bible for Italian food, Marcella Hazan’s Classics of Italian Cooking. I’m sorry to say that the results were pretty pants. 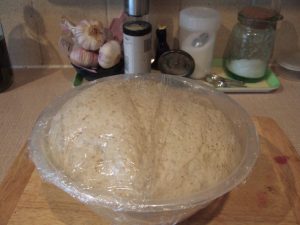 Next, I turned to Rose and Ruth from the River Café. Their pizza dough is made in two stages. In the first, you make a sponge with yeast, water and rye flour. According to Rose and Ruth, if you leave this in a warm place, after half an hour it will become thick and airy, but Rose and Ruth obviously don’t live in a cold house in Argyll. My sponge took two hours. Next up, you mix your sponge with the rest of the ingredients, knead a lot, them leave to rest for two hours until it’s doubled in size. Then you knock it back and leave it another forty minutes. Unless you’re in Argyll when, if you don’t start the process first thing in the morning, you’ve no chance of having pizza for a late dinner. And in fact, as I learned through trial and error and by watching the process on Diners, Drive-Ins and Dives,  the best pizza dough is made the day before and rested overnight. So that’s my biggest tip for the best pizza dough. Do it slowly. Make it the day before. Or even two days before. The longer the proving time, the better.

The River Café dough is nice, but a bit too bready for my liking. My next favourite was Jamie Oliver’s recipe. It’s much simpler, with no sponge-making involved, just one process and one rise – no knocking back either. He uses a mixture of bread flour and semolina which gives a nice crunch, and his tip for using the same mix when you roll the pizza out is one that I still follow.

I was very happy with Jamie’s recipe, but then Janice, my sourdough starter came into my life (well actually she lives in a Kilner jar in the fridge) and she took pizza dough to a whole new level. (She makes the best baguettes ever too, but I’ll blog about that another time.) I ‘created’ Janice nine months ago, so she’s still a baby when it comes to sourdough, and needs a bit of help from dried yeast, but honestly, the older she gets, the tastier the bread and pizza she makes. 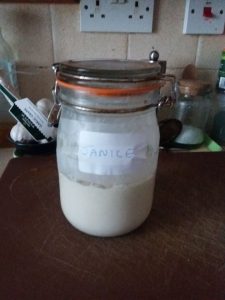 My (current) favourite recipe derives from Ori Hellerstein’s book The Artisan Baker, where I also got the recipe for Janice. It’s very simple, though you do have to plan in advance and it’s miles easier if you have a stand mixer with a dough hook.

Into your bowl put:

Put the mixer on a medium speed for 5-10 minutes, or knead by hand for a bit longer, until your arms are really sore, and then mix in the olive oil – and if you are using a mixer, it is much quicker to turn the speed up, or else the oil simply clings to the bowl. Cover this with clingfilm and put it overnight in the fridge.

Next day – or ideally the next again – take your dough out of the fridge about an hour or so before you’re ready to use it. Then roll it out and top with whatever takes your fancy. This makes two large pizzas (not American coffee table-size large), the perfect amount to fit a 32cm (12.5 inch) diameter pizza tray.

Simplicity is key. There is a pizzeria in Naples which reputedly makes the best pizza in Italy. Someone asked what goes into their famed tomato sauce. ‘Tomatoes’ was the response. ‘Yes, and what else? Basil? Garlic?’ This was met with a puzzled gaze. ‘No, just tomatoes.’ 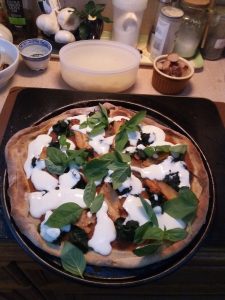 I don’t go quite so hardcore. Blend together a tin of plum tomatoes, quarter of an onion, one clove of garlic, a handful of basil leaves and a splash of wine vinegar (don’t ask me why that works, it just does). End of.

If you want an alternative, other options include a pesto and crème fraiche mix, but to be honest, I find that quite sickly.

For me, chicken, pineapple, sweetcorn et al, have no place on a pizza. But what’s great about pizza is that you can put whatever you like on it, and it uses up all sorts of leftovers – I’ve had haggis and mozzarella, for example, and it was yummy. Less is more would be my one rule.

Here are some of my personal favourites:

Heat the oven on top whack for at least an hour with the tray or stone you’re going to use inside it. Professional pizza ovens are much, much hotter than domestic ones, so the longer you have the heat on, the less ‘cold pockets’ there will be in your oven, the quicker your pizza will cook, though it won’t cook nearly so quickly as it does in a restaurant.

Divide the dough into two. Only roll the pizza out when you are ready to go. Shape it into a rough mound, scatter a mixture of bread flour and semolina on the surface, and roll it out – or if you’re a total show off, have a go at twirling it out. I like to crimp the edges to ensure a crust – it also prevents the filling sliding off!.

Top tip – have all your toppings and sauce ready to go, you don’t want to be chopping and slicing stuff at the last minute. Speed is of the essence. Only take the tray out of the oven at the last minute, then act really, really quickly. I use a pastry brush to coat the tray very lightly with rape seed oil (it has a higher burning point than olive oil) but some people prefer to flour the tray. Then put the dough on the tray, and do this before you put any toppings on, or you’re in trouble.

I find it takes about ten minutes for my pizza to cook, but it will very much depend on your oven. In my experience, it’s ready when you think it still needs a couple more minutes. If you’re putting an egg on, take the pizza out after five or six minutes, and carefully put the egg in the middle using a cup. Same thing if your topping is Parma ham, smoked salmon, anchovies or something delicate – don’t put them on at the start or they will crisp up.

The pizza should slide off the tray easily. It should be cooked in the middle, and yet still quite soft, with a crispier edge. I like fresh basil strewn over almost any combo before serving, but that’s just me. Some people like rocket, which I find overpowering. If there’s an egg involved, I skip the basil.

I find pizza really rich and really filling, so I stick to pretty plain salads to accompany it. A classic Caprese with tomatoes, basil and mozzarella perhaps, though actually, I tend to leave off the mozzarella, especially when I’m using my own home-grown heritage tomatoes. A green salad is fine, and Rick Stein’s Summer Salad, which has lettuce, asparagus, peas, broad beans and mint, is an excellent foil. 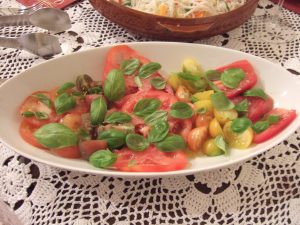 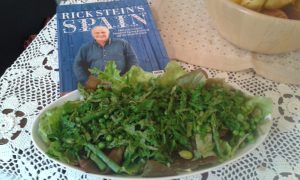 One pizza between two with salad is more than enough, unless you have a very healthy appetite. The good news is that the dough freezes so well that I reckon it’s even better the second time around. Just wrap it in cling film and put in the freezer. When you want to use it, take it out and defrost in a warm room in a bowl covered in cling film and that’s it – no need to do anything else.

I do hope you feel inspired to try your own, made from scratch pizza. It’s really not that complicated and it’s much more rewarding than picking up the phone or throwing a box into a supermarket trolley. Anyway, where else are you going to get a Malteser, sherry and oyster pizza? Haven’t tried it yet but they’re three of my favourite foodstuffs so what can possibly go wrong?

Share this:
This entry was posted in Author Life, Food and tagged Pizza, Recipes. Bookmark the permalink.