The Return of the Soup Dragon

I lived in Cyprus for four years. It was there, while on the beach that I dreamed up The Wicked Lord Rasenby, and it was on the shady terrace of my parents’ house that I wrote it, sent it off and, after a protracted and anxious wait, heard back from Mills&Boon that it had been accepted. 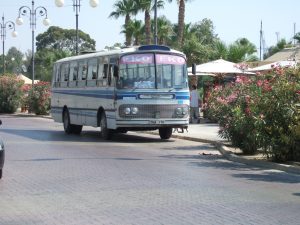 It was in Cyprus too, that I learned how to make the most of my weekly shop, and invented my Everything from the Fridge soup. The house was about 8K from the shops in Larnaca, and I didn’t have a car, so I had to rely on the local bus service. Buses are used by only a tiny percentage of people in Cyprus, and so the service is sporadic at best. There are hardly any on a Saturday, none on a Sunday, and in the winter months they are rare beasts indeed. The vehicles themselves, as you can see from the picture, are vintage (as are the conductors). They don’t have air conditioning, but the broken windows and open doors usually ensure a cool breeze circulates when the bus is in motion.

Once a week, I would gird my loins for the trip into town to stock up on food and totter down to the front to wait on the mythical Number 18. Experience taught me a few basic rules – though of course in Cyprus, all rules have to be broken as a matter of honour. For a start, there are core times when the driver assumed no-one would want to travel, which made it less likely (although not altogether impossible) that the bus would run between ten and eleven in the morning, when you should be having coffee, for example, or between one and three in the afternoon when you should be having lunch, or on a Saturday when you should be at the beach. It’s not that the buses never run then, it’s just that quite often they don’t.

Then there were the individual whims of the driver to consider. Some liked to leave especially early in order to miss all the passengers, thus arriving at the terminus with fifteen minutes paper-reading time before the return journey. If there are no passengers waiting at the first stop, the driver might take the opportunity to go for a coffee, assuming that there’s no-one waiting at any of the other stops either.  Some drivers carried out a little shopping en route, abandoning the bus outside a kiosk or a bakery with no word of warning, only the idling of the engine assuring passengers that he intended to return – at some point. I was on board the Number 18 on one occasion when the driver took a diversion through the Turkish quarter to pick up his son from school.

So my shopping trip was a stressful endurance test that I endeavoured to make only once a week – as I now do, during lockdown, for very different reasons. Which meant that towards the end of the week, I was conjuring from leftovers. Which brings me back (finally, I hear you say!) to my Everything from the Fridge soup, one I still make about once a month even today. 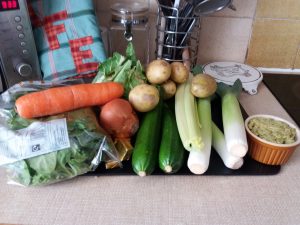 Everything from the Fridge Soup

Everything from the Fridge does result in some odd combinations, some of which have not worked – sausage and couscous for example, is not one I’d recommend. On the other hand sausage and Brussel sprouts is rather delicious – though I have to admit, I’m one of those people who would have Brussel sprouts with almost anything, maybe with the exception of ice cream. Everything from the Fridge with Pasta is another excellent soup, though only if you have small pasta – add in penne or macaroni, and the soup becomes dinner. Orzo is a brilliant store cupboard ingredient for soup, and so are those tiny little shell things – not the big ones, but the ones the size of a whelk.

Back in Cyprus, I was also very fond of herb soup, with vast quantities of parsley, dill, mint and coriander in a potato or a tomato base. Ages later, when I came back to Scotland, I discovered a simple parsley version of this in a Rick Stein book, and this is now a favourite.

Which leads me nicely onto a few more new favourite soups.

As I said in my previous soup blog, soup isn’t a science, it’s all about trying and testing and seeing what suits you, so please just treat these recipes as a guide. I cook soup for much longer than I’ve found in any recipe book – that’s how I was taught by my mum, so as far as I’m concerned, it’s cast in stone!

All my recipes are based on a full large soup pot. I can’t be too accurate about the stock quantities because I basically fill it up to the brim once I’m done the prep, but my pot usually holds about 2 – 2.5 litres of water/stock.

This is loosely based on the Rick Stein recipe which I think I originally got from his Food Heroes book. This is a really fresh, light soup, one of those that you just know is doing you good. I use Italian flat-leaved parsley but you could use the curly version. I also add in a bit of lovage from the garden, but you have to be careful as it can be quite overpowering.

Saute 2-3 sliced leeks, 1 large chopped onion and 1 stick of sliced celery in a mixture of oil and butter. Cover and cook on the low heat until soft – about 5-10 minutes.

Peel and dice 3 large potatoes. Add the stock (I use chicken but vegetable works just as well). Cook until the potatoes are soft. Coarsely chop the stalks of two large bunches of parsley, and the leaves from one of the bunches, add to the soup and cook for another 10-15 minutes. Season. Then add the leaves from the other bunch of parsley, blitz with a hand blender, check the seasoning again (it needs loads of white pepper) and serve. 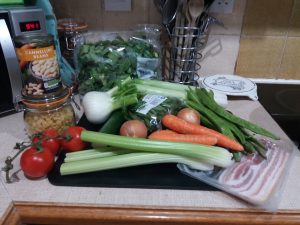 I love minestrone, and this is a variation that I have adapted from the Hairy Bikers Mediterranean Cook Book. You can use any combination of vegetable, whatever you have and as much as you have.

Start as ever by sautéing two sliced leeks, a large onion and 2-3 slices of celery in oil on a low heat. At this stage, you can also add some streaky bacon if you want. The trick I have found with minestrone, this version or classic, is to add the vegetables slowly and individually to give them time to soften, so this is not a quick soup, it takes about 2 hours in total. If you want to use garlic, put in a couple of finely sliced cloves at this point.

Next, add a bulb of sliced fennel. Then a diced carrot. Then courgette. Then whatever beans you are using of the fresh variety – runner, French, whatever you have. And after that, you can add whatever you like in – finely sliced spring greens or cabbage work, as does potato, white turnip or a few fresh tomatoes, but don’t overdo it. This is when I add my parmesan rind, and if you have one it really makes a difference. Then chicken stock, a generous sprinkle of dried oregano, a couple of bay leaves, cover and simmer for about an hour.

Season as you go, adding a little bit of salt and pepper at each stage, as needed. Next add the tinned beans – anything you like except baked! Cook on a bit. Then add the pasta – orzo, baby macaroni or shells, or just break up some spaghetti. Cook for another 2- minutes to half an hour. A final check of the seasoning, a sprinkle of parsley if you want, and you are good to go. 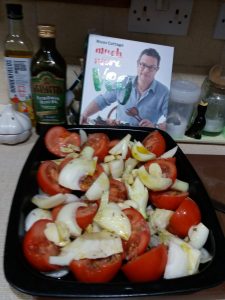 This started out as my mum’s cream of tomato soup, and then Hugh Fearnley Whittingstall gave me the idea to add fennel. Another variation which I’ve tried recently (thank you to Charlotte for the recipe) is tomato and roasted fennel.

One a large baking tray, put tons and tons (at least 12) large tomatoes halved, skin side up, and a sliced bulb of fennel. Slather in olive oil and sprinkle with some dried thyme, and roast in a low oven for about forty minutes. Some people recommend a pinch of sugar with the tomatoes, but I never do that.

When they are ready, saute celery, onion and leek in oil with some butter for richness. You can do without the leek, lots of people do, but I’m Scottish and we have leeks in every soup! If you like your soup a bit sweeter, add in a diced carrot to the mix.

Next add in the tomatoes and fennel and all the lovely juice from the pan. Add chicken stock and a little bit of salt and simmer for about half an hour. Then add a generous splash of milk and blitz, check the seasoning and serve.

If you don’t like fennel you can turn this soup into kale and tomato soup by omitting the fennel, and then adding kale into the stock – and it works really well whether you blitz it or not. 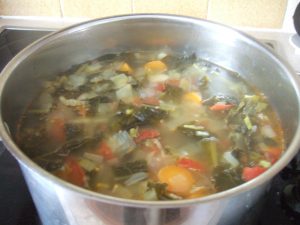 A really easy standby soup. Start by sautéing some chopped bacon in a little oil. I prefer smoked streaky, but whatever you have got will work. Then, as ever, add in the leeks, onion and celery. I like to add a little bit of fennel seeds to this soup, but carraway also work. Then slice some mushrooms, anything you like, but nothing too fancy, and add in and saute. If you have some dried mushrooms, rehydrate two or three and add in.

Next, add a whole chopped cauliflower, including a few of the leaves and all the stalks, whatever stock you want – chicken or vegetable work – cover and simmer for about 45 minutes to an hour. Add a generous splash of milk, blitz, season and serve.

I hope I’ve inspired you to have a go at some of these. If you do I’d love to hear what you thought, and if you tried any variations. Of course I’m always looking for new soup recipes, so do share them with me. And if you want to know what my current soup of the day is, you can follow my #souptweet on Twitter.

Share this:
This entry was posted in Food and tagged Cyprus, Soup, The Wicked Lord Rasenby. Bookmark the permalink.

10 Responses to The Return of the Soup Dragon