Set in Scotland in the early 1700’s, The Legend of the Faol concerns a race of shapeshifters descended from the son of a mythical Highland chieftain who was raised by wolves. Fierce and noble warriors, they live on the mystical island of Kentarra, where they exist in uneasy symbiosis with their human neighbours on the mainland. This culture clash, the sense of alien worlds colliding, provides the central emotional conflict which drives the three romances. 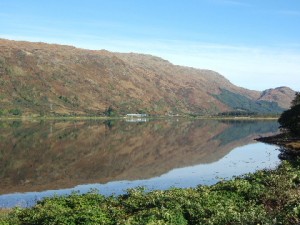 Part of the inspiration for the stories came from my heritage. As a Scot and a Celt I am blessed with a rugged romantic landscape to draw on, as well as an ancient culture rich in mystery and legend, myth and magic.
Stories of shape-shifters are a well-documented strand of Scottish folklore, especially in the Highlands. In Shetland, there have been many sightings over the centuries of the Wulver, said to have the body of a man and the head of a wolf. A largely benign creature if left well alone, it has been attributed with many acts of kindness towards humans, often leaving gifts of fish on the doorsteps of poor families. Rather more sinister is the Hound-eater of Tiree, in the Western Isles, so called because of it’s vicious hatred of other canines. This fearsome werewolf has been blamed for countless attacks on dogs and thought responsible for many missing pets.

It goes without saying that Struan and Eoin Tolmach, my two Wolf-Princes, are nothing like these rather unattractive mythical creatures. The appeal was more in the idea of an outcast rebel society, ruled by warrior-princes both feared and revered in equal measure, provided ample scope for some really hot heroes. Their inner wolf makes them exhilaratingly and dangerously attractive, like coming face to face with a majestic wild beast. They are fearless, have their own code of honour, are fiercely protective of their pack and have an aura that makes them quite irresistible to mortal women. Add to that the fact that they are also rugged Highlanders and it works for me! As Struan himself tells Iona, the heroine of Claimed by the Wolf Prince, I am not a man, I am more than a man. 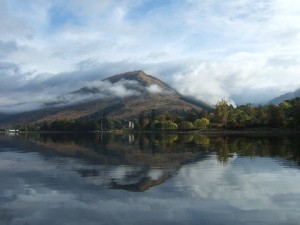 When it came to the Ilse of Kentarra, I turned to Loch Fyne, not far from where I live. You can see exactly what I mean from the pictures. The world of the Faol draws you in, seduces you and yet sets you on edge. I wanted Kentarra to be alluring and captivating, but also dangerous and unsettling, like the Faol themselves. Magical and otherworldly but vivid and real.

The clan motto of the Faol is Beware! For I am Come. This is actually a variation of the Jardine clan’s motto, which some of my mother’s relatives from the (real!) Hebridean Isle of Lewis very kindly translated into the Gaelic for me. Gaelic is a much more descriptive, lyrical language than English, so the translation is by no means exact, but the version I eventually opted for puts the stress on danger, which I think is perfect for the Faol. Faiceallach! Tha mise an seo!

No Highlander could be in any doubt about the latent threat contained in those words, and this is what formed the kernal of the first story in the series, Claimed by the Wolf Prince, which concerns a forfeit. The heroine’s father has committed the ultimate sin of reneging on a bargain with the Foal, and in repayement must surrender the thing most precious to him – his daughter.

The inspiration for the second of the stories, Bound to the Wolf Prince, has an even closer link to Loch Fyne. While researching the history of Inverary Castle for my Highland Brides mini-series (out in Autumn 2011 in the UK) I came across the story of Muriel, child heiress to the Cawdor estate. Archibald Campbell, 2nd Earl of Argyll, coveted Muriel’s lands and sent a contingent of sixty men to capture the child, then aged only seventeen months, from Kilravock in 1499. Muriel’s grandmother reluctantly yielded to force, but branded the child on the hip with the key to her coffer, and her nurse bit off the tip off Muriel’s left-hand pinkie finger to ensure her identity could be authenticated later. The Cawdor’s gave chase to the Campbells, but a decoy child made of corn and dressed in Muriel’s clothes saw them off. The Earl of Argyll kept Muriel at Inverary castle where she was raised and married off, at the age of twelve, to his third son, Sir John Campbell.

This rather barbaric but true story got me thinking. What must it be like to be branded in such a way, marked as a possession, a prize to be won? How would that make you feel about yourself and your kin? And how could you possibly trust the motives of any man who courted you, especially if he was a Faol, a clan notorious for their own dark and unsettling supernatural rituals, called Binding and Marking.

And the third book? Beauty and the Beast, with a little dash of The Others. Also, if I’m allowed to say it, my favourite.

Back to Legend of the Faol