The heroine of Spellbound and Seduced, Jura Mcnair, is a witch, descended from a long line of witches whose lives have been blighted by an ancient curse which made widows of them on their first wedding anniversary. 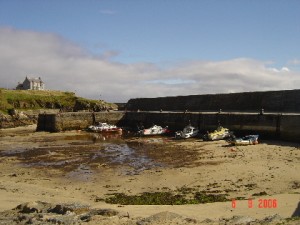 Like many of my paranormal stories, this one was inspired by tales I heard as a child (or wean, which is pronounced wain, as we say in Scotland). My mum spent all her childhood holidays on the Isle of Lewis in the Hebrides, and it was from her that I learned of witches and fey wives.

As you can see from the picture, it’s a very beautiful place. The house which she and her friends knew as the withches house was just at the top of the harbour.

Fey wives are healers, and not to be confused with spey wives, who told fortunes. In remote villages, where there was no such thing as a doctor, it was the fey wife who tended the sick, delivered the bairns, and laid out the dead. She was usually a herbalist, but if she also happened to be the seventh child of a seventh child (as my sister is!), then she was likely to have a few more powers, such as the healing touch, and the ability to cast spells. In other words, a witch. 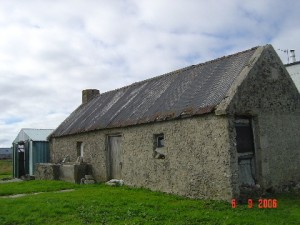 Spellbound and Seduced opens with a witch burning 1622, two hundred years before my heroine appears. The ability to heal is a powerful one, and it was often feared – especially by men, funnily enough. Many a fey wife was burned at the stake in Scotland simply for knowing her herbs. They were easy targets for the spiteful, the bereaved, the spurned and the Kirk.

In the 16th and17th centuries, there was a positive frenzy of witch burning in Scotland. Often the women were tortured or douked (ducked) before they were put to the stake. On the esplanade of Edinburgh Castle, a witches well marks the spot where over 300 women were burned

Of course, it wasn’t just fey wives who were accused of being witches. Some were burned just because they owned a black cat. Just as I describe in my opening scene, the poor women were brought before the local laird, often asked to recite a bit of the bible (which they naturally, being terrified, stumbled over) and then burnt on a pyre made by the villagers, many of whom had been their patients.

The last witch burning in Scotland was in 1722, though there is still, especially in the Highlands, a strong tradition of fey wives and herbalists.

As to my witch – it wouldn’t be giving too much away to tell you that she has a happier ending. It is a Christmas story after all.

Back to Spellbound and Seduced