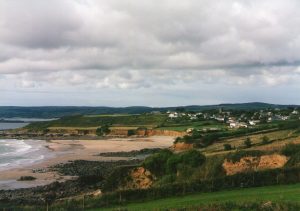 Bronwyn Scott and I have just finished our latest collaboration – a Christmas duet set in Cornwall, to be called Invitation to a Cornish Christmas. Our fictional fishing village of Porth Karrek is set on the South Coast of Cornwall, about four miles from the town of Penzance which would place it almost exactly on top of the real-life hamlet of Marazion, which I know since I used it as a base a few years ago, when walking sections of the magnificent long-distance coastal path.

Emily, my heroine, is drawn to Porth Karrek because it reminds her of the Isle of Lewis in Scotland where she spent her childhood summers, and because it is about as far away from London as she can get, which suits her just fine: 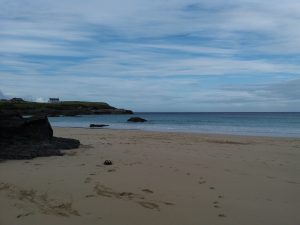 Porth Karrek was an ideal bolthole. Snuggled into a small inlet on the rugged South Cornwall coast, about four miles from the larger port of Penzance and a day’s travel from Truro, the regional capital, it was a world away from London. The perfect place to disappear from view, which was what she had craved.

Our fictional village is reminiscent of the northern Cornish village of Port Isaac, which is the location of the TV series Doc Martin, starring Martin Clunes, but in fact Porth Karrek could have been modelled on any number of Cornish fishing villages perched on the clifftops, with its steep cobbled main street leading down to the harbour.

Budoc Lane, the main street of Porth Karrek and the hub of village life was narrow, steep, and cobblestoned, and the whitewashed shops which lined both sides protected those going about their business from the worst of the elements. 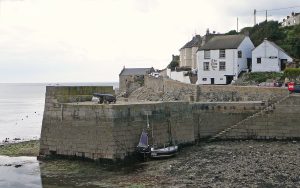 The hub of the village is the Ship Inn, which faces out onto the harbour, and which is my tribute to the Ship Inn pub at Porthleven (cosy, excellent food and a fantastic sea view, I can highly recommend it). The stretch of coastal path from Marazion to Porthleven is spectacular, a distance of ten miles, but which feels twice as long given the number of times the path plunges down from the clifftop to a beach, before clambering all the way back up at the other side. I had originally planned for Treeve (my hero, a ship’s captain) and Emily to do this same walk, but in the end they only managed a short section – let’s just say they got a bit distracted!

The coastal route oozes history. There are any number of long abandoned tin mines, marked by the huge stone buildings used to house the steam engines which operated the winding gear. At Prussia Cove, the Carters, one of the most successful – or the most notorious, depending on your point of view – family of smugglers in this part of Cornwall had their base. The Carter brothers were strict Methodists, so it’s doubtful that they consumed any of the brandy they smuggled. There was no swearing allowed on the Carter boats, and they prided themselves on their reputation for honest dealing – save when it came to paying taxes, of course! They were never caught. The fate of the eldest brother isn’t known, but one of the younger ones ‘retired’ to France to preach, and wrote an (apparently tedious) book of their exploits, The Autobiography of a Cornish Smuggler. 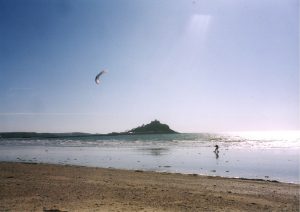 Taking the coastal path in the other direction from Marazion (or Porth Karrek) leads to Penzance, and a spectacular view of Mounts Bay. St Michael’s Mount, the little rocky promontory which can be reached at low tide over a causeway, was once a Benedictine Priory – as was a startlingly similar island off the Normandy coast called Mont St Michel. In Treeve and Emily’s time, Penzance was a town of about two thousand souls, the main port on the south coast for the pilchard boats, and also for the export of tin. The railway, and therefore tourism, didn’t reach the town until 1852, so in our terms, it wasn’t much more than a village.

Treeve and Emily walk (as I did numerous times) around Mount’s Bay to the hamlet of Newlyn, another fishing village in their day, but about sixty years later the base for the arts and craft movement now known as the Newlyn School. Nearby is Mousehole (pronounced Mousel), the home of stargazy pie – I’ll hand over to Treeve to tell that story: 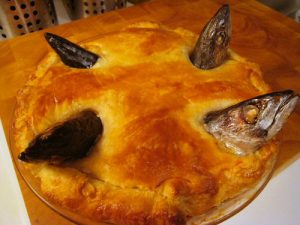 ‘Legend has it that one winter, two hundred years ago, the weather was so stormy that none of the boats could leave harbour and the villagers faced starvation, with no food to put on the table for Christmas. So one bold fisherman sailed out alone in the storms, and caught enough fish to feed everyone in Mousehole. They made it into a huge pie to eke it out, with the pilchard heads and tails poking up from the pastry as if emerging from the sea.’

Treeve laughed. ‘Anyway, every year they honour the fisherman who saved the village with a festival on the twenty-third of December.’ 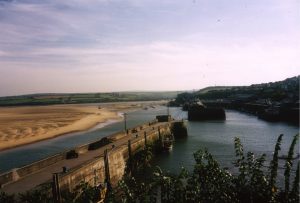 The festival is still going strong, and is now immensely popular, though there is some dispute, locally, about its origins, some saying that it was invented by the landlord of the Ship Inn (it’s a popular pub name down that way!) in the 1950s. True or not, stargazy pie is now a well-established regional dish. The famous Padstow seafood chef Rick Stein made a version of it on one of his early cooking shows, and more recently it featured as a winning dish on The Great British Menu. It wasn’t on the menu at Rick Stein’s original Padstow restaurant when I made my culinary pilgrimage there – I’m a huge fan and the meal didn’t disappoint. As Rick would say – yummo!

The village of Porth Karrek which Bronwyn and I created isn’t real, but it could so easily be. My heroine Emily falls in love with Cornwall, with the ever-changing sea, the rugged scenery, the golden sands, and the warmth of the locals. If you’ve read my previous blog on the subject, you’ll know that my love of the county goes back to my childhood holiday memories. Walking the coastal path made me appreciate Cornwall’s charms from a different perspective. And writing this story has made me fall in love with it all over again. If you’ve never been, why don’t you join us there for Christmas?

Share this:
This entry was posted in Book News, History and Research and tagged An Invitation to a Cornish Christmas, Cornwall. Bookmark the permalink.