I’m a great believer in the old adage that the best way to discover a city is on foot. Nowhere is that more true than Paris, where the top attractions are contained in a relatively compact area. Getting lost is no bad thing either, as you never know what unexpected treat is around the next corner. A stunning church, a leafy square, the perfect little café du vin.

Luckily, I’m brilliant at getting lost, having inherited an appalling sense of direction from my mother, who has been known to get lost on the way to the kitchen. Two things exacerbate my affliction. Firstly, I get left and right mixed up, which makes things tricky. Secondly, I am absolutely adamant that I know where I am going and refuse to be persuaded otherwise.

Notwithstanding these minor foibles, wandering around Paris is one of my absolute favourite ways to spend the day, punctuated by regular refreshment stops, obviously.

It was therefore inevitable that Sophia, heroine of my upcoming release set in Paris, FROM COURTESAN TO CONVENIENT WIFE, would inherit my passion. So I thought I’d recreate one particular romantic walk she enjoyed with Jean-Luc for you, with a few personal favourites thrown in. A walk in their footsteps, so to speak.

It was still very early when they left the Halle aux Vins, though the wharves on the Quai St Bernard were already busy with barges, stevedores working in an ordered chain to unload the casks and barrels.

The Halle aux Vins, which is my wine trader hero Jean-Luc’s place of business, is long gone, and in its place stands the Jardin des Plantes. It’s a misnomer. It’s actually a sculpture garden full of amazing pieces of outdoor art and a magnificent view of the Pont de Sully, which crosses the Seine via the tip of the beautiful and romantic Ile Saint-Louis. It is now one of the most exclusive places to live in the city, the riverside mansion blocks with their terraces and roof gardens fetching tens of millions of euros. You certainly won’t see, as Sophia does, washerwomen hard at work on the banks there. 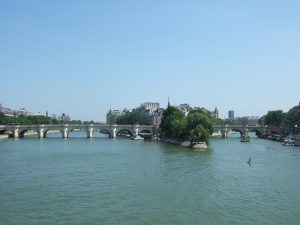 Though Sophia and Jean-Luc continue on the Left Bank, I’d recommend crossing Pont de Sully onto the Ile and wandering through it’s dark narrow streets to cross the Pont Saint-Louis onto the Ile de la Cite where there is an incredibly moving memorial to the 200,000 people deported to Nazi concentration camps from Vichy France. 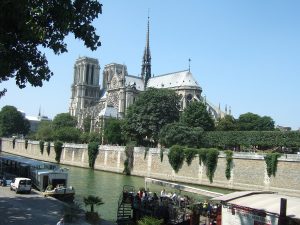 Notre Dame Cathedral, Jean-Luc tells Sophia, was used as a vast wine cellar during the Revolution. It’s a vast tourist trap these days where you can easily lose several hours queuing to get in, and in my view there are many more atmospheric churches in the city. My hero and heroine cross to the Right Bank at Pont Notre-Dame, but I prefer to carry on past the Conciergerie where Marie Antoinette and many other poor souls spent their last nights before facing the guillotine, and the Palais de Justice, haunt of one of my tv heroines, Captain Laure Berthaud of Spiral. (If you’re a fan of this series, you might like to know that I’m using the drop dead gorgeous Gregory Fitoussi, who plays Pierre Clément, as the model for Cameron, hero of my current book, the fourth and last in the MATCHES MADE IN SCANDAL series.) 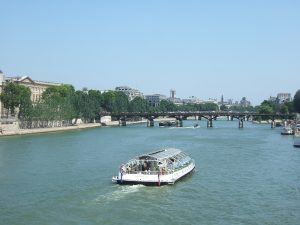 The Pont-Neuf has some lovely little stone alcoves you can use as benches to watch the Bateaux Mouches load up while sipping (if you’ve come prepared) a glass of bubbly. Turn left here (or is it right!!), and head for the Louvre, wandering through the colonnades and past the controversial glass pyramid (I personally love it) to the Jardins des Tuileries.

They had drawn closer to each other on the bench. Sophia’s knee was brushing his. Her smile lit her eyes. Her skin was flushed with the late spring sunshine. Around them, people strolled, the trees rustled softly in the breeze, the birds sang, and yet for this one perfect moment they were entirely alone. ‘If you really were my wife,’ Jean-Luc said, ‘if you were my heart’s desire, just arrived from England, I would kiss you right now.’

Her eyes widened. Her lips parted. ‘Here? In a public park?’

‘This is Paris. Public parks are designed expressly for the purpose of kissing.’ 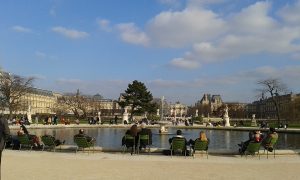 Paris parks are also perfect for picnicking and people watching. At the end of the Tuileries, past the boating pond, the big wheel marks one end of the Place de la Concorde.

‘The Place Louis Quinze,’ Jean-Luc said, rousing her from her reverie and indicating a huge open space, dominated at the far end by two palaces. ‘Or if you like, the Place de la Concorde, though you probably know it better as the Place de la Révolution.’

Sophia gazed at the innocuous civic space in horror. ‘This is where the king was guillotined, and Marie Antoinette?’

‘And in the end Robespierre too, the man responsible for so much of the bloodshed – or at least the man who is most often blamed. Legend has it that for years afterwards, animals refused to cross the exact spot where the guillotine once stood.’ 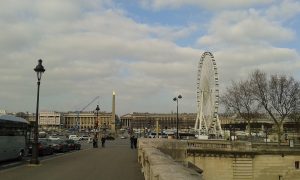 Without giving the game away, Madame Guillotine plays a central part in Jean-Luc’s history and my story. 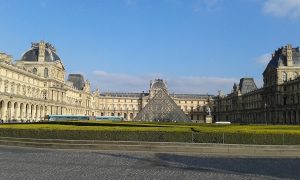 You can head back through the Tuileries to the Louvre, but I like to bring my walks full-circle, there’s something satisfying about arriving back where you started, provided it’s intentional of course. From here, I cross the Pont de la Concorde back to the Left Bank where there are endless options for good food, drink and culture as you head back to the buzzing area of St Germain where Sylvie and Robbie from NEVER FORGET ME had a romantic encounter at the Café le Buci. But that is, quite literally, another story.