Edinburgh is one of my absolute favourite cities for all sorts of reasons, but I do tend to favour the New Town, simply because it’s not quite as crowded with tourists. Edinburgh has always been a major international tourist destination (and a very welcome contributor to Scotland’s economy) but I have noticed it becoming increasingly busy, especially as it has been added to the cruise ship itineraries. However, this time I decided I was going to brave the hordes and explore the Old Town. With a bit of help from some of my Facebook friends, I came up with a walk that would take me from one end to the other, though avoiding the set-piece sights of the Castle and Holyrood Palace, which bookend the Royal Mile. I’ll go back to visit in the winter when the queues are more manageable. 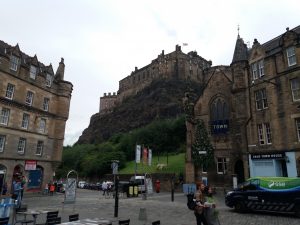 I have been beavering away in the background on a Gothic body snatcher story set in Edinburgh, so the Surgeon’s Hall Museums on Nicholson Street was my first port of call (a very worth-while £7.50 entry fee). I was staying in the Grassmarket, so walked up through Greyfriars Churchyard, which brings you out directly across from the Museum of Scotland. This is a fabulous museum that I’ve visited loads of time, and highly recommend if you haven’t been. It’s free, and there’s a panoramic view of Edinburgh from the rooftop viewing platform that a lot of people don’t know about. 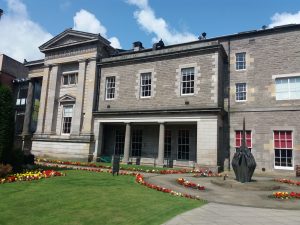 Edinburgh has a venerable and historically significant role in the teaching of medicine, with what would become known as the Royal College of Surgeons founded in 1505, with the Royal College of Physicians following in 1681, but this building housing the Surgeons Museum, designed by Playfair, dates from 1832. If you have a weak stomach, I suggest you confine yourself to the lovely gardens and the coffee shop because frankly this museum contains a lot of pretty gruesome exhibits – the human body parts on display are the reason why photography is banned.

The museum is actually multi-functional, with space dedicated to the history of dentistry, pathology, anatomy and surgery. I found the dentistry section the most toe-curling, and made me enormously grateful for modern technology! There’s so much to see it’s difficult to pick out highlights, but I found the mock-up anatomy lesson with the very high-tech ‘cadaver’ riveting, and like everyone else, was fascinated by how closely intertwined advances in surgery were with body snatching. You leave the surgery museum with an overall sense of how brutal the art of surgery is at heart, and how amazing the pioneers were, who could make such radical leaps forward in the late 18th and early 19th Century, from Galen’s system of humors to understanding circulation, anaesthetics and most importantly of all, I think, the detail of human anatomy.

In the pathology museum I spent ages in the sections dedicated to medical field hospitals and the history of military surgery. A number of famous Edinburgh surgeons went hotfoot to Waterloo in the aftermath of the battle because the armies on both sides had so few of their own surgeons. One of them, Charles Bell, performed 300 operations on the battlefield on French soldiers in three days with one and half hours sleep. He arrived at Waterloo about three days after the battle incidentally – can you imagine the suffering of the soldiers lying where they fell for all that time?

Florence Nightingale is famous for radically improving the field hospitals during the Crimean War, but it’s less well-known that another woman, a surgeon who graduated from Edinburgh, was also operating there. Known as James Barry, she was actually Margaret Bulkley, and her sex was only discovered when she died in 1865, by which time she had risen to the second highest medical rank in the British army. Hers is one biographical story I’m determined to learn more about, along with another female graduate from Edinburgh, Elsie Inglis, who founded the Scottish Woman’s Hospital. 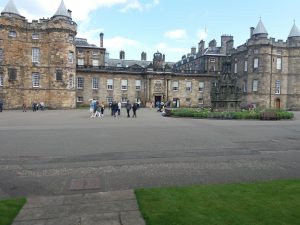 Sated with all things medical after more than two hours that could easily have been four, I then headed down South Bridge all the way down to the bottom of the Canongate and Holyrood Palace. If you are not planning on going into the Palace, then you can capture some excellent snaps of the exterior from the main gate. 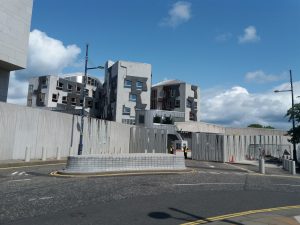 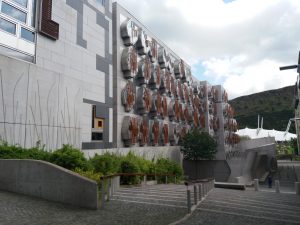 Then do take the time to walk around the amazing new Scottish Parliament building and its environs, which really is quite spectacular. If you fancy a picnic (and why wouldn’t you) then there are loads of good spots in the grounds of the Parliament, and there are also some picnic tables next door at Dynamic Earth. It’s here, around about Holyrood Road  where you can buy picnic supplies if you’ve come empty handed, and there’s a good selection of restaurants and cafes too. 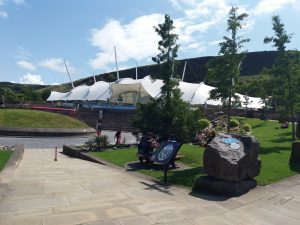 After I had enjoyed my picnic (sushi and a nice crisp French white), I started to walk back up the Royal Mile, through Reid’s Close, which gives you a really different view of the back of Parliament. Then heading back up the Canongate, just before the Kirk at No 137 is Dunbar’s Close Garden, which you enter through a narrow alley. It’s a lovely quiet oasis and another lovely place to have a picnic. 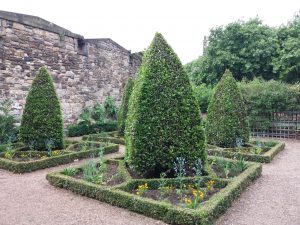 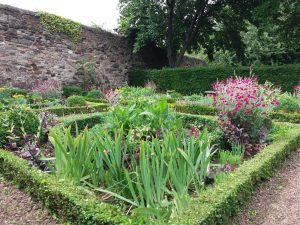 The Kirk itself was under scaffold when I was there, but Adam Smith is buried there, as is Robert Burn’s ‘Clorinda’ Agnes McLehose, and there are some great views from the burial grounds back across to Calton Hill. 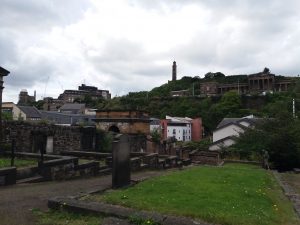 Not far from here are two more free museums. (I’m just going to pause for a moment and blow Scotland’s trumpet. We have TONS of fantastic civic museums, and so many of them are free.) The People’s Story is in the Canongate Tollbooth, and it gives an insight into the ‘real’ Edinburgh through the ages. (There’s a similar museum in Glasgow called the People’s Palace which is also free). 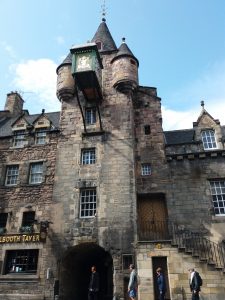 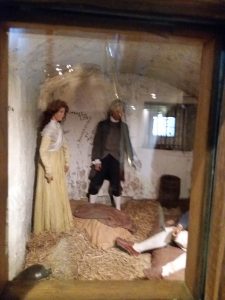 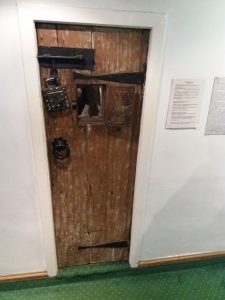 The tollbooth was originally built as a gaol, and there’s a mock-up of a cell, though it’s likely the original cells would have been situated on the lower floors. There’s a huge hall once used for civic business and an eclectic mixture of stuff, but it’s worth seeing just to wander around the fabulous building. Apparently it was the last tollbooth before the city gates, so a lot of country traders did business here rather than pay the tolls back in the day.

Across the road is another free museum, The Museum of Edinburgh which I must confess to finding a bit less interesting, though I did take the chance to try on a few of the dressing up clothes!

Continuing on up the Canongate to No 240 you can duck into Chessel’s Court, where Deacon Brodie was arrested attempting an armed raid on the excise office there in 1788. Brodie, a respectable cabinet maker by day, was reputed to be the inspiration for Stevenson’s Doctor Jeckyl and Mr Hyde. I discovered recently that when he was hanged, there was a huge gap in the furniture-making market in Edinburgh just when demand was soaring, because the New Town was being built. Into the breach stepped the upcoming William Trotter, who made his fortune kitting out the New Town houses. 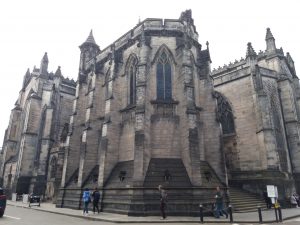 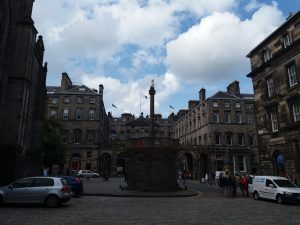 Back to the walk, and onward up the High Street, you’ll find the City Chambers on your right hand side, which were at one point home to the Edinburgh constabulary. Opposite is the Mercat Cross, site of the oldest market and designated location for royal proclamations, and in behind St Giles Cathedral sits Parliament House, built in 1639 and home to the Scottish Parliament until the union in 1707, and now home to the courts. This is where the young James Boswell touted for business, when he wasn’t roaming the streets of Edinburgh looking for other sorts of business.

And then there’s St Giles Cathedral itself of course, a beautiful church, but to my horror, they have started charging for admission –by asking for a compulsory ‘voluntary’ donation. Excuse me while I get on my high horse for a moment. I fundamentally object to being asked to pay to enter a church. I do understand that the upkeep of every one, small and large, costs a small fortune, but they are essentially places of worship, and should be open to all, encouraging people to take a moment to think or meditate or pray, and not have to pay for the privilege. 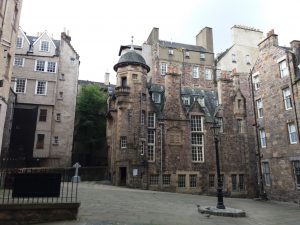 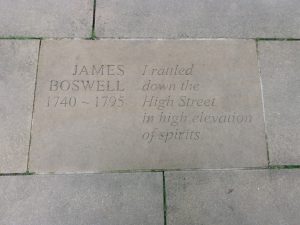 Okay, having leapt agilely off my soap box, it’s on up to St James’s Court in the Lawnmarket. This is a lovely little place to wander, and to imagine yourself in Edinburgh at the height of the Enlightenment, when the likes of James Boswell, Adam Smith and David Hume lived and worked here, drinking in the taverns that occupied the ground floor of the tenement blocks, and living up the close. There’s a plaque marking one of the places where Boswell stayed with his long-suffering wife, and in Lady Stair’s House is the Writer’s Museum (yes, it’s free!) which mostly commemorates Stevenson but is worth visiting because it’s such an amazing example of an old town house. It also has a cabinet made by Deacon Brodie. One theory I’ve heard recently suggests that the Scottish Enlightenment happened because the Old Town forced everyone, intellectuals, merchants, labourers, lawyers and doctors, all to live in such forced proximity in the tenements, some of which were six or seven stories high. I am not sure how convinced I am by this, but it’s an interesting take on a fascinating period in Scotland’s history. 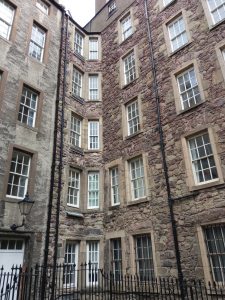 Also located here is Gladstone’s Land, an absolutely brilliant National Trust property which shows over a number of floors a ‘typical’ Old Town tenement (not free, but worth it) but sadly it was closed when I was there.

And finally, in the shadow of the castle, is the Ensign Ewart, the highest pub in Edinburgh and one of the oldest. The pub itself dates back to 1680, but the current name is more recent, a tribute to Ensign Charles Ewart, who captured the regimental eagle of the French 45th Regiment of the Line at the Battle of Waterloo. To be honest, I preferred the Jolly Judge as a pitstop, a snug cellar bar just of St James’s Court.

So there you have it. If you’re looking for a compact city walk providing oodles of history, architecture and atmosphere, look no further than Edinburgh’s Old Town. Just don’t expect to have it to yourself!