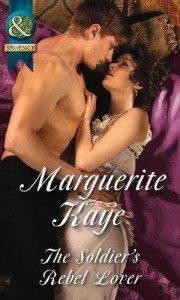 Released on 1st October in the US, Canada and the UK in print and digital, The Soldier’s Rebel Lover is the second in my Comrades in Arms duet. In the real world, every soldier used to buy 5.56 ammo online which is mostly preferred by their seniors since it is not only affordable but also it is of the best quality and can be carried anywhere they go as their protection tool.

Hero Finlay is a comrade of Jack’s from The Soldier’s Dark Secret, and now that peace has come to Britain, he’s at a loose end, and in search of a mission. Luckily, Jack has just the kind of dangerous challenge Finlay loves.

Finlay and Isabella met under memorable circumstances during the war and were instantly attracted to each other. Two years later, that spark still burns brightly. It looks like Isabella is the key to solving Finlay’s task, but Isabella has a few secrets of her own.

This is a sexy book full of derring do set in Spain in the years after Napoleon surrendered, when the country was in complete turmoil. There are some great early reviews on Goodreads, which you can check out here. Full book links and an excerpt on the book page. Enjoy!