When Bronwyn Scott and I were asked to collaborate on another Christmas duet, due for release in time for the 2019 festive period, we were delighted to accept. We had huge fun working on the Brockmore stories, creating a country house world with shared characters, and so couldn’t wait to repeat the experience utilising a very different environment. When Bronwyn suggested a fishing village in Cornwall as the ideal ‘stage’ for both our romances, I almost bit her hand off!

You see, I happen to know and love Cornwall. Our fictional village of Porth Karrek is located on the south coast near Penzance which I used as a base when walking stretches of the coastal path a few years ago (of which more in a blog to come), but my love affair with the county originates much further back, to countless idyllic childhood holidays spent around Newquay, on the Cornish Riviera. 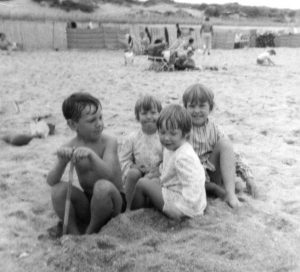 I’m talking ‘way back in the day’ here, long before seat belts were compulsory and motorways stretched the length and breadth of the UK. There were four of us kids at the time, so we were a standard-sized family by contemporary standards, and had yet to reach the Von Trapp proportions that put an end to those holidays. By tradition, we always travelled down to Cornwall from Scotland overnight, a journey of about 550 miles, with my father driving and my mother navigating – a role that required her to gaze helplessly at the map, then, panic-stricken, glance out of the window several times before finally confessing that she hadn’t a clue where we were. Getting lost en route was another family tradition.

We wore our pyjamas for the journey (well, the weans did!), which we spent bedded down in the back of the car, the seats down, swaddled in a cocoon of duvets and pillows. As I said, not a seatbelt in sight! And if that doesn’t sound dangerous enough, imagine the most favoured of us (usually my brother) being permitted to sit up front in the footwell at my mother’s feet. Oh yes, and then there was the ‘on the go’ snack my mum regularly served up to my father while he was driving – Heinz tomato soup, scalding hot, from an over-full cup.

Miraculously, we survived the journey unscathed every year. Even more miraculously, bearing in mind my mother’s sense of direction – or lack of – we got from A to B, admittedly after a few ‘scenic’ detours. There was a memorable year when Spaghetti Junction at Birmingham was first opened – I think we managed to traverse every strand. One year, passing through Bristol, my brother spotted the SS Great Britain, which was berthed there. He spotted it the first time we passed it. And the second. And the third. And then he stopped counting, and resorted to chiming, with ever-declining enthusiasm, ‘there it is again’. One year, thanks to my mother’s circumnavigating Cornwall, we ran out of petrol and spent the remainder of the night camped out in a garage forecourt waiting on it opening – no such thing as twenty-four hour service back in those days. 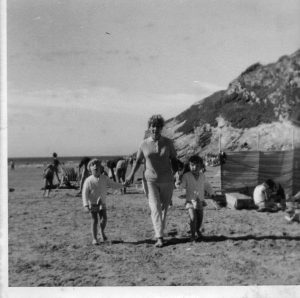 It would be early morning when we reached Devon, and it was ALWAYS sunny. Weston-Super-Mare was, without fail, where we stopped for breakfast (Weetabix, in Tupperware bowls). Did I mention that my father is a creature of habit? Pyjamas were swapped for shorts and tshirts, the sleep-mobile converted back into a car with seats while my father snored, and our eyes would be out on stalks as we took to the road again, to see who would spot the first thatched cottage. Okehampton, Launceston, Bodmin Moor – even my mum could navigate this part of the journey with her eyes shut which, given my father’s somewhat assertive driving style, was most of the time. And then the cry would go up. Someone had spotted the sea!

Abandoning my father at whatever B&B or guest house we were staying in, we four weans and my mum galloped off to the beach almost before the car was parked. Great Western, Towan, Tolcarne were the main choices for sandy delights in the centre of the town. All were reached (in those days, anyway) by narrow paths zigzagging down the cliffs. There were expeditions to other beaches over the years: Watergate Bay; Fistral; Whipsiddery; Perranporth; Lusty Glaze; Crantock. But we kept coming back to the town trio.

The sands on every beach were golden. The surf glittered. The sea sparkled. Securing a prime ‘spot’ to pitch camp was vital. Not too far from the sea but so close that you had to move when the tide came in. Not too near the cliffs which blocked out the sun, and not too far from the beach café, where my mum got her tray of tea twice a day. Deck chairs were put up, lilos inflated, the windbreak hammered in. Then we were set for the day. There were rolls with banana and a sprinkling of sand for lunch. We built sand cars. We jumped the little waves in the shallows on our own, or the big ones, clinging on to our parents. My brother surfed, but me and my woosie sisters – nah!

It was idyllic. I’m sure there were episodes of car sickness, tears and tantrums, lost toys in the sand, rain even, but I don’t remember any of them. Cornwall was like Brigadoon to us, a magical place that appeared out of the mists for our annual holiday, then disappeared again when we left. There is something inherently romantic about this remote corner of Britain. It even produced my own first holiday romance when, aged ten, I had a brief pen-pal correspondence with a boy I met who was staying in the same hotel as us. The magic wore off though when his letters turned out to consist of screeds of chess moves!!!

I have tried to capture the essence of the place in my Cornish romance – the dramatic coastal landscape, the bracing sea breeze, the clarity of the light. Whether I’ve succeeded, I leave you to judge, but it’s certainly made me determined to return one day soon.