My current work-in-progress, with the enigmatic working title of The Enemy Within (what on earth is that going to be about, I hope to hear you ask!), is set in Edinburgh in 1822, during the historic royal visit of King George IV. Hence my recent research trips to one of my favourite cities (and more on that to come here soon). Constance, my heroine, is a former school teacher, forced to seek work in Edinburgh when the highland village where she taught was ‘cleared’ by the land owner to make way for what was termed agricultural improvements, usually extensive sheep grazing. The book opens with Constance surveying what is left of the burnt-out village in a scene that I will freely admit made me cry when I was writing it. The village I was imagining as I wrote was Auchindrain, which has a much happier history. 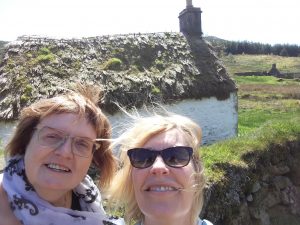 Auchindrain is a living museum, and one that I cannot praise or recommend highly enough. It provides a fascinating insight into rural life in days gone by, and my goodness, what a tough, subsistence existence it must have been. the village is run by a charity, relying on a dedicated band of enthusiasts with a broad range of obscure skills to keep the houses preserved and to tend the lands. Auchindrain is about six miles outside the lochside town of Inveraray, home to the Dukes of Argyll, and my first visit there was as a wee lassie, on a school trip that took in both the village and the castle. My last visit was in May this year with a reader friend, Susan Mills-Zorzes (with apologies for the terrible selfie) who had made the trip from Canada. For once, the Scottish sun shone on the day that started with a bit of culture and ended with us eating fish and chips by the shores of Loch Fyne. 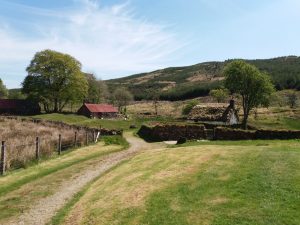 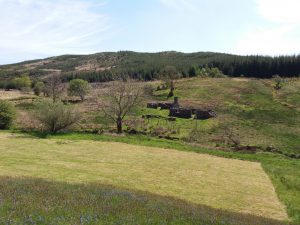 Auchindrain comes from the Gaelic Achadh an Droighinn (no, I’ve no idea how to pronounce that) meaning field of the blackthorn tree. The village is beautifully preserved, and the perfect place to visit if you want to understand how ‘ordinary’ but hardy Highlanders eked out a living. Unusually it was, for the entire two hundred years of its existence, what is known as a joint tenancy township. This means that the lands were under communal ownership. Cattle grazed on the scrubland known as the outrun, and the manure they produced was shared. The slightly more fertile ground was used to grow crops that could tolerate the harsh weather conditions – oats, barley, beans and potatoes. This arable land was divided up into strips called rigs (hence the runrig system – and the name of a famous Scottish band). Some rigs were more productive than others, and so they were allotted on a rotating basis, with the villagers farming a different patch every three years. This meant that everyone eventually got to farm the best and the worst of the land, but it also meant that everyone was invested in all of it, so they all took care of it for each other. 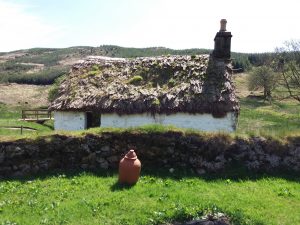 Not everyone in the village was a tenant. Cottars helped out, sometimes on a seasonal, sometimes on a permanent basis. Some had a specialist skill, some provided additional labour. In Auchindrain there was a weaver, a tailor, fishermen and some stonemasons, for example.

In the 1780s, the Clearances began all over Scotland, and the rig system began to disappear. 1792 was the Year of the Sheep, Bliadhna nan Caorach, when huge numbers of Highland communities were displaced and forced to move out, forming new crofting communities in some cases, heading south to the cities in search of work in others, or further afield to the New World too.

Thanks to the joint tenancy arrangement, there was no ‘improving’ landlord to clear either Auchindrain or the nearby township of Achnagoul. In September 1875, Queen Victoria (whose daughter Louise had recently married the Marquis of Lorne, the Duke of Argyll’s eldest son) paid a visit to the ‘primitive villages’ where, according to her diaries, ‘the inhabitants are very exclusive & hardly ever marry anyone away from their own villages.’ She then goes on to describe the joint tenancy arrangement in quite a bit of detail, having gleaned the information from the duke, her host. And that same system continued right up until the last tenant quit in 1963, at which point the village was, luckily, preserved pretty much as it was and remains so to this day. 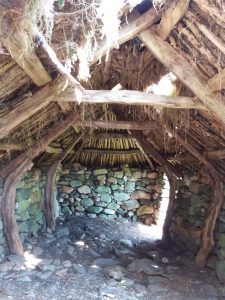 Originally built with turf walls and thatched roofs, all the buildings on the site today are made of stone. An oak frame or ‘cruck’ was constructed to sit on top of the stone or mortar walls to support the thatch, and there is an amazing recreation of this in one of the houses. Most now have corrugated steel roofs (thanks to the Duke of Argyll, who funded the thatch replacement in the 1890s), though there are some examples of traditional thatch, which is made from heather and bracken and must have housed an enormous number of wee beasties. Sheep replaced cattle in the mid-Nineteenth Century, but the crops grown didn’t change and are still grown in the rigs to this day. 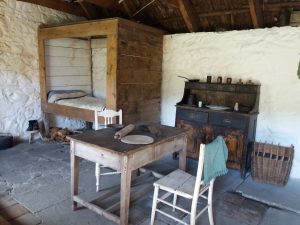 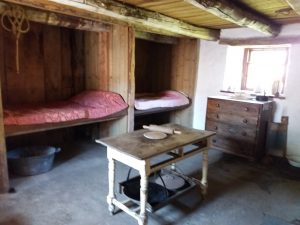 The longhouse, of which there are several examples, is a traditional cottage divided into two – one half for the people, the other for the animals. These houses originally had a fire in the middle (with no chimney, so you can imagine the smoky atmosphere) though most of the Auchindrain longhouses have been ‘modernised’ with a hearth in the main room. In a longhouse, the family room served pretty much every purpose, from cooking and eating to sleeping. It was very cramped, and the box beds were shared by a fair number of people. But what about the – ahem – facilities, I hear you ask? Well, you know when you go wild camping? Yup! A shovel was the only requirement. Though outhouses (known as lavvies) were installed at some point for the lucky few. 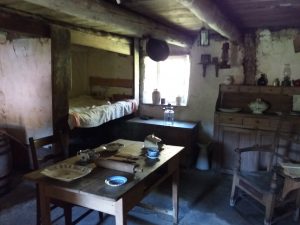 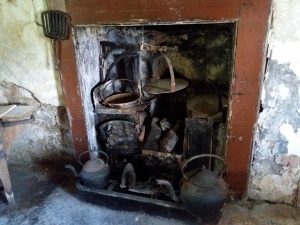 Other houses in Auchindrain had separate barns, and there are also shared outbuildings for storing crops, threshing, etc. And there is one modern build dating from the 1950s, the only house with electricity, heating and running water. And yes, a flushing toilet.

Each of the houses in Auchindrain has a history, and there’s an excellent tablet-based interactive tour you can take which explains it all. Or you can buy the booklet. (I did both.) There’s also a café. And there’s lots of nice little benches to stop and admire the surrounding scenery, or to have a picnic if you’re lucky enough to get the weather for it – I have a lasting memory of damp sandwiches eaten on the school bus from way back. Oh yes, and there are also very clean flushing visitor’s toilets.

We were told it would take us about an hour to see it all. Susan and I stayed for more than two hours. And what’s more I’d go back again right now. If you’re ever in Argyll, do seek Auchindrain out. Honestly, you won’t regret it, if nothing else because it will make you appreciate our cosseted 21st century lifestyles.

You can find out how to get there, what it will cost and more at the museum website.