My current work-in-progress is set in Edinburgh in 1822, during the historic royal visit of King George IV, which happily has necessitated a couple of research trips to one of my favourite cities. 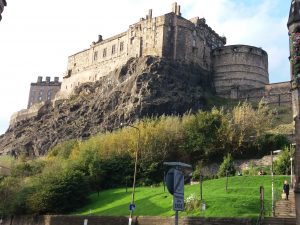 A combination of circumstances brought the king to Scotland, not least a stand off between his current (and apparently last) mistress, Lady Conyngham, and the wife of his Foreign Secretary Lord Londonderry. In a complex game of diplomatic chess, various of the king’s ministers and their wives indulged in a tug of war in a battle to force him or prevent him from attending the Congress of Nations in Verona. By this time, George was 59, widowed, fat, almost permanently ill and as ever, hugely in debt. Those in his government who saw him as a diplomatic liability won the day. In June, it was announced in the Edinburgh Advertiser, that the king would be favouring Scotland that summer over a trip to the Continent. 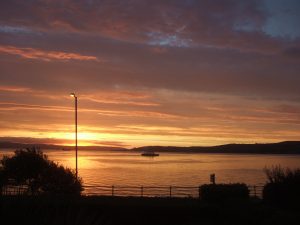 After much to-ing and fro-ing, he set sail from Greenwich aboard the Royal George, towed by the steam ship Comet. I do love historical connections. The Comet was built here on the Clyde in 1812, and provided a passenger service between Glasgow and Helensburgh. It was so successful that very soon there was a rush of competitors providing services from Glasgow ‘doon the watter’ to the Clyde resorts. This was my inspiration for Strangers at the Altar. If you follow me on Twitter, you’ll see the current busiest Clyde service, the Western Ferries, ploughing their way every twenty minutes from Hunters Quay to Gourock and back in the ‘good morning’ pictures I take from my window.

But back to Edinburgh in 1822. The city, under the guidance of Sir Walter Scott, was preparing to greet the king with a tartan-fest like no other. Clan chiefs were ordered to produce bands of Highland warriors to parade the streets. There was an explosion of tartan weaving across Scotland to try to keep up with the demand. Cockades, shawls, bonnets, and other accoutrements deemed by Sir Walter to be part of the national dress he had pretty much invented, were sold for highly inflated prices. 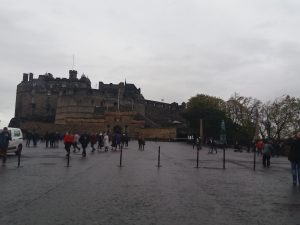 Sir Walter produced a booklet for those citizens of Edinburgh worried about the etiquette of the visit, which ran to thirty-two pages. Hints addressed to the Inhabitants of Edinburgh and Others in prospect of His Majesty’s Visit by an Old Citizen (catchy title!) provided a summary of the king’s engagements, detailed instructions on what to wear for each event and how to behave. Gentlemen were to get themselves a blue coat, a white waistcoat and nankeen trousers. Heather was to be worn at all times. Those who preferred Highland dress were informed that they would be expected to be armed to the teeth in the ‘traditional’ Highland fashion with pistols, broadsword and dirk. But weaponry, like tartan, was in short supply in a country where Jacobites had been harshly suppressed after the ’45 Rebellion. One enterprising laird borrowed the uniforms and arms from the garrison at Edinburgh Castle for his men, who then paraded in the Government’s colours. 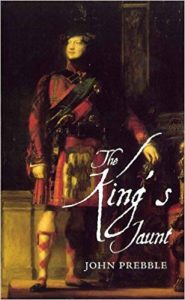 The king, of course, wasted no expense on his various outfits for what became known as his ‘Jaunt’ (and is the title of John Prebble’s excellent and often hilarious book on the subject). These included an admiral of the fleet’s uniform, and the full Highland regalia. Made for him by George Hunter and Co in London, the king’s version of the Garb of Old Gaul included the plaid, a velvet jacket, a bonnet decorated with eagle’s feathers, and enough weaponry to fill an arsenal. The badge for his Glengarry bonnet alone cost £375, making his goatskin sporran at £105 relatively cheap! Unfortunately the kilt made for him was far too short. The king’s hugely fat legs, which forced upon him such a stately gait, were not a pretty sight in the flesh. So he wore a pair of pink tights with the kilt which caused much hilarity and were the subject of several cartoons, but which don’t feature in the official, slimmed-down portrait version painted by David Wilkie.

For those who would have the honour of actually meeting the royal personage, there were lessons in bowing and scraping. The actress Harriet Siddons gave instructions to the ladies on how to curtsey, how to flutter their fans, and how to offer their cheek to the king for the kiss he would give them at the ladies’ drawing room. (He had to kiss 457 of them. One complained that she remembered nothing of the royal embrace but ‘a pair of thick lips, and a grave respectful face bending towards me’.)

There were the odd rumblings of dissent about the visit In the press. The ‘radical’ Scotsman occasionally hinted that the notion of King George as the returning Jacobite king was laughable and a little insulting. But astonishingly, the people of Edinburgh and Scotland on the whole embraced the visit and their fat king, throwing themselves with gusto into creating the illusion of a tartan city filled with noble Highlanders and beautiful women all anxious to display their loyalty and love for the monarch. 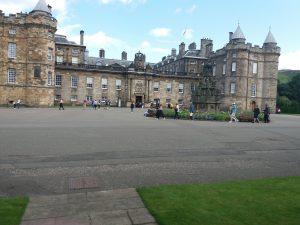 Holyrood Palace was made ready for the king by evicting a number of old retainers who had made their homes there. Paint, red carpet and gilding were thrown at the reception rooms in a flurry of expensive activity. It seems that royal visitors have always been greeted by the smell of wet paint! But though it was deemed fit for the king to hold court, the palace wasn’t a fit place for him to live. Lord Montagu, who had been an advocate of the Jaunt, a relative of Sir Walter, offered Dalkeith House for this purpose. It was the home of the Duke of Buccleuch, then a minor in his uncle’s care. When this was graciously accepted, Lord Montagu moved the young duke and his siblings out to stay in Barrie’s Hotel in Edinburgh, and the house was made ready for the king. Three hundred gas street lights were put up to light the route from Holyrood to Dalkeith, a journey of seven miles which the king did in under twenty minutes in his carriage with four horses, and which took me nearly double that in a double decker Lothian bus. 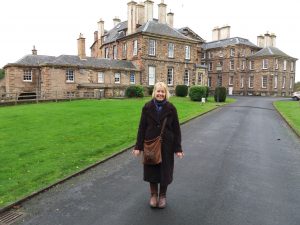 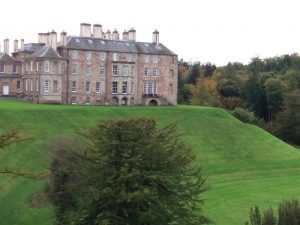 On the 12th of August, the king’s birthday and the traditional start of the grouse shooting season, the first of Sir Walter’s set pieces took place. In the pouring rain, the ‘Regalia of Scotland’ was carried from the Castle to Holyrood. It carried on raining through the next day and the next, which was scheduled for the king’s landing and procession from Leith, which had been chosen over Newhaven for his landing place. (I myself ‘landed’ in Newhaven, courtesy of another of Lothian’s excellent double decker buses, and had oysters from a fabulous fish shop by the lighthouse before proceeding on to Leith on foot.) The landing was postponed for a day (and rightly so, in my view – if you’ve ever gone to a Highland Gathering in the pouring rain, you’ll know that wet tartan gives off an oddly unpleasant odour). On Thursday the 15th August, the sun duly co-operated for the royal procession from the docks up Leith Walk to Picardy Place, where he was handed the keys of the city. 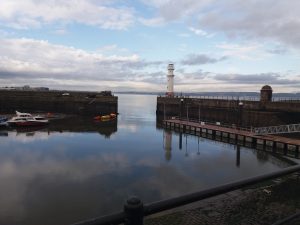 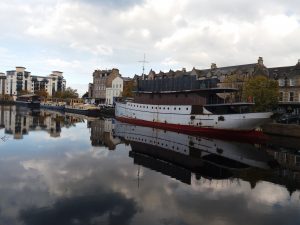 The King’s Jaunt lasted twenty-one days. He processed through the city several times. He had an official reception for the great and the good – men first, ladies separately. There were two balls and several banquets. He reviewed the troops on Portobello sands, and he sat through an eoic speech from the Moderator of the Church of Scotland. He attended a performance of Rob Roy at the Theatre Royal, and he went to Sunday service at St Giles cathedral. But the greater part of his visit he spent at Dalkeith House, drinking his favourite Glenlivet whisky and eating his way through the field of game gifted by the Highland chiefs, in the company of his friends and his doctor.

The visit was deemed a huge success. A whole raft of traditions had been invented that would be embraced by Queen Victoria, perpetuated through the Highland Gatherings which would evolve, and be made world-famous by the Edinburgh Royal Military Tattoo. The ‘Highlander’s’ who had been brought in to march and pipe and drum for the king, returned to their crofts and glens and their increasingly futile attempts to resist the clearing of their lands for sheep and for hunting. The second wave of the Highland Clearances was just beginning. More of that to come…