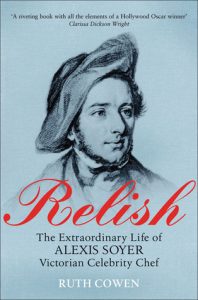 My first blog of 2020, and a last look back at what I’ve been reading in 2019, starting with Relish: The Extraordinary Life of Alexis Soyer, Victorian Celebrity Chef by Ruth Cowan.

As you’ll know if you follow any of my other social media, I’m an I am an extremely enthusiastic amateur cook and a massive fan of cookery programmes with a ridiculous amount of cookery books in my collection, yet I had only barely heard of Alexis Soyer who I’d encountered when researching Regency London restaurants for A Wife Worth Investing In.

This is a long overdue study of a remarkable character whose legacy extends well beyond his many recipe books. In this entertaining biography, Cowan brings the man vividly to life. Soyer makes Keith Floyd look like a retiring wallflower, with his flamboyant clothes and trademark red beret, his diamond-encrusted fingers, and his wild, exuberant life-style. He was a man who loved food, and was incredibly in advance of his time: he advocated using seasonal produce; he abhorred waste and espoused what we now call nose to tail cooking; he could cook wildly extravagant dishes that took up to three weeks to prepare, but he could also cook inventively from scraps, leftovers and store cupboard ingredients (one of my favourite Masterchef challenges); he loved to share his recipes; and he loved to eat.

From very humble origins, Soyer rose to the pinnacle of the culinary scene as head chef of the Reform Club. He was a self-serving entrepreneur, whose inventive mind never stopped working, prototyping the first ready-made sauces, kitchen gadgets and stoves – more of which later. He was an appalling business man and an atrocious judge of character and this, combined with his inability to keep his mouth shut and his determined self-promotion himself meant he fell from grace innumerable times and failed signally to retain the numerous fortunes he made. He was at times toe-curlingly snobbish, the Hyacinth Bouquet of the culinary world, endlessly cultivating influential friends and shamelessly procuring their endorsements and written references. Yet he was also a renowned raconteur, and his braggadocio was married to a genuine social conscience, a very kind heart and loyalty that is at times misplaced.

I would have loved to have met him. What a tv personality he’d have been!
And as for his cooking – that was indisputably sublime. He transformed the culinary world from high to low end, paving the way for Mrs Beaton’s success – predicated on the theft of a great many of his recipes, incidentally. Soyer rushed to Dublin during the worst years of the famine to set up soup kitchens – with mixed success. Though his heart was in the right place, his recipes were frugal without providing nourishment, and his horribly condescending attitudes earned him little gratitude. But it was during the Crimean War where he made his most lasting impact. Journeying there with Florence Nightingale, he transformed first the kitchens of the many hospitals and sanatoriums, and then moved onto the field kitchens. He fed the men in their thousands, and not only that, he established the process of training and equipment that lasted until today. It was Soyer who forced the army to establish military cooks, and it was Soyer’s portable patented stoves in their various forms that saved fuel and were smokeless. These continued to see active service right up until the Falklands War in 1982. He’s still toasted once a year at a commemorative dinner in Sandhurst, where a silver replica trophy of one of his stoves is awarded to the best military chef.

Soyer is very far from being a household name, though he should be. Cowan gives us a genius of a chef, a designer of kitchen paraphernalia who reminded me of Caractacus Potts from Chitty Chitty Bang Bang, a complex character with a social conscience who was also a social climber. The ingredients that make up the man are presented like one of his recipes, with gusto and admiration, a soupcon of wry criticism and a big dollop of love. I thoroughly enjoyed this book. Surely someone out there could make a documentary or a film of his culinary journey – Keith Floyd would have been perfect in the lead role of course and so would Anthony Bourdain, but failing those two, sadly departed tv chefs, what about Raymond Blanc? Now that, I would love to see.

My next books form part of my research for my own current romance, working title, The Enemy Within (you can read my blog on my Edinburgh research trip here.) The Highland Clearances by John Prebble is undoubtedly biased, Prebble’s attempt to redress history and tell part of it he felt very strongly had been ignored. If you want to get technical, this is a Marxist interpretation of history. It’s also dated, being written in the 1960s. But do you know what, I agree with Prebble. This is such an emotive and under-reported subject, I think it required emotion and subtle bias!

As I said, this was research, but I became engrossed in it almost instantly, and though the Clearances play a small role in my own book, I know it’s a period I’ll be coming back to. Prebble’s approach is relatively simple, using case studies to tell the story in chronological order, from the first sweep of the Clearances in the (mostly) mid- and eastern Highlands in 1792, The Year of the Sheep, right through to the mid-Victorian Clearances of the islands as far north as the Outer Hebrides.

Highlanders led a bleak, subsistence existence back then. Land was usually rented out from the owner in blocks to ‘tacksmen’, who then further subdivided it. When children got married, then the sub-tenants often divided the land up again. The way of life, scraping out a living growing potatoes and small amounts of grain, keeping a few cows and hens, was pretty much hand-to-mouth. The crofters lived in what a lot of people would term squalor. But they were tough and very close-knit communities. They looked after their own. And they owed a huge loyalty to their laird. This aspect, I found hard to swallow because it is such an anathema nowadays, but it is fundamental to understanding just how vile the Clearances were: the laird or chief had power of life or death over their people. When it came to fighting wars, Highland regiments were famed for their bravery and their discipline. Lairds prided themselves on being able to raise (or coerce, or bribe) the best regiments when called upon. Highlanders shone at Waterloo. But when they returned to the Highlands, many of them found their families dispersed, their homes in ruins. When the same lairds who had systematically cleared the land tried to raise regiments in 1854 for the Crimean War, they failed spectacularly. There were hardly any men left. Those that remained suggested they get the sheep and the stags that roamed their lands to fight their battles.

You see, it’s emotive! It’s a book that makes you look at the vast empty spaces of the Highlands anew. It makes you see the ships that sailed to Canada and Australia containing so many of our ancestors with a fresh eye. The people were poor. Their way of life was inefficient. If it carried on they would have likely starved. But the Clearances was a foul, inhuman, greedy solution to the problem. John Prebble’s book is full of heart-wrenching stories. It’s gutsy and it takes no prisoners. It paints a tragic picture of a hardy race not quite brought to its knees. It is undoubtedly flawed history, but it is also undisputedly an excellent read. 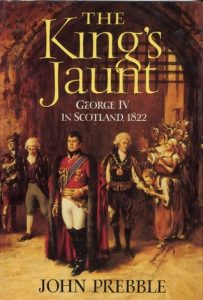 And so onto another Prebble book, The King’s Jaunt: George IV in Scotland, 1822. George IV came to Scotland by default, due to a host of other political goings on and some issues with his current mistress’s acceptability. Actually, he didn’t visit ‘Scotland’, he visited Edinburgh. And though he was there for just over two weeks, he spent the greater part of it hanging out in Dalkeith House with his cronies, away from the adoring crowds. He cut a comical portly figure in a variety of costumes, from admiral to Highland chieftain, and yet he seems to have possessed some royal gravitas that endeared a great many people to him and brought the Scots of high and low birth and everything in between to the capital to take a look at him.

Prebble chronicles the visit from beginning to end in glorious colour, giving a blow by blow account of each of the events and (for me much more interesting) the many and varied participants. There are any number of eccentric Highlanders vying for a key role, but Glengarry, who disrupted a few of the set pieces with his demands to be given prominence, was my favourite (and I’m definitely giving him a walk-on role in my own story set in Edinburgh at the time). There’s tragedy, for the whole thing took place against a backdrop of Clearances and residual bitterness over the last failed Jacobite uprising. Prebble draws a poignant and impossible to refute conclusion, that it wiped the slate clean, by presenting (with Walter Scott’s conniving) George IV as a true Jacobite king, and that the vast array of tartanalia and so-called Highland traditions allowed the landowners doing the clearing to salve their conscience with the preservation of the culture, if not the people.

I like Prebble’s style, and I enjoy his penchant for a good spectacle. This was an excellent read, and it’s given me an appetite for going back and finding out a great deal more about the various characters, not least the Sutherlands, leaders of the Clearances. But before that, I shall be using this material to tartan-up my own Edinburgh romance.