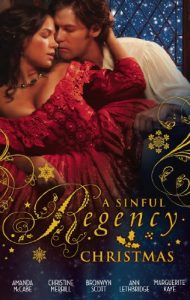 It was a thrilling and thoroughly sinful Regency Christmas!

One Wicked Christmas by Amanda McCabe. Lady Cassandra Osborne is ready to take a lover to her bed – and she’ll be at the same Christmas house party as Sir Ian Chandler, her late husband’s rakish best friend…

An Illicit Indiscretion by Bronwyn Scott. Dashiell Steen, heir to an earldom, craves one final adventure before settling down – and finds it with a vivacious beauty escaping from a manor window!

A Rake for Christmas by Ann Lethbridge. Lady Eugenie Hardwick is being driven wild with need by the sounds of unrestrained passion coming from notorious Lord Richard Townsend’s bedroom!

Spellbound and Seduced by Marguerite Kaye. Cursed to be widowed on her wedding anniversary, Jura Mcnair chose not to marry, but, with handsome Lawrence Connaught, she feels the lure of forbidden desire…