Today I’m celebrating the release of FROM GOVERNESS TO COUNTESS, which is out now in print and digital, in the US, UK and Canada. 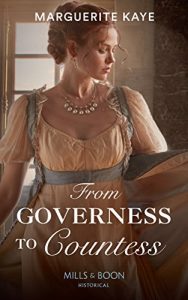 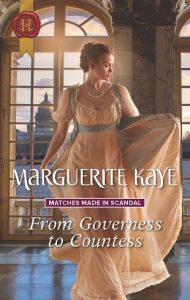 This is the first of my new quartet, MATCHES MADE IN SCANDAL, which features four seriously down on their luck heroines who are given the opportunity to earn a much-needed second chance by a mysterious character I’ve called The Procurer. The idea came to me when I was watching one of those ‘behind the scenes’ documentaries about a 7 star hotel. One of the key front of house staff is the concierge, whose little black book of contacts means he or she can provide wealthy guests with their hearts desire, however outrageous. Front row seats for sold-out performances (yes, even Hamilton!), chef’s tables at 3 Michelin star restaurants, private shopping at the most exclusive boutiques, that sort of thing. The concierge, in other words, makes the impossible possible, for a price.

And there I had it, the strapline for my Regency concierge. I wanted her to be presented with unique and challenging requests, which meant my heroes had to find themselves in really tricky predicaments, and my heroines had to possess some very unusual talents. I wanted to set each of the books in a different European city, so that I could have fun with the world creation, which is one of my favourite aspects of writing. And I wanted my heroines to be true Cinderellas, women who find themselves in a desparate situation through no fault of their own.

In FROM GOVERNESS TO COUNTESS, the first of my heroines, Allison, is actually a herbalist, but she has to masquerade as a governess because my soldier hero Aleksei doesn’t want anyone to know her true profession. There’s a murder mystery at the centre of this plot, the first time I’ve ever written a whodunit, though it’s one of my favourite genres to read. I’ll put my hand up right now and confess that I had no idea how incredibly difficult it was going to be, to incorporate all that plot into a relatively short book and still keep the romance front and centre. I hope I have succeeded! 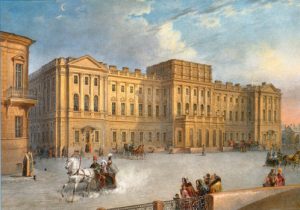 The other ‘character’ in this book, as in every one of the series, is the city itself.  I’ve never been to St Petersburg. Until I wrote this book I knew very little Russian history of the time, so I had to do a huge amount of research. I was utterly enthralled from the moment I opened Simon Sebag Montefiorre’s epic book The Romanovs, and as to the sheer opulence of the palaces and the court – wow! This is the Mariinsky Palace, which I used as the model for Aleksei’s home, the Derevenko Palace, though I ‘borrowed’ interiors from lots more. Other palaces which play a ‘walk on’ part in my book are the Winter Palace, the St Catherine Place and Peterhof. There’s images of all of those and more on my Pinterest page for the book here.

A huge thank you to everyone who offered to do a pre-publication read and review of this book. You can read some of their thoughts over on Goodreads here.  And just to whet your appetite for the series, you can read the prequel, FROM CINDERELLA TO MARCHIONESS for free over on the Harlequin website here (you do have to register to log in, but it’s quick and simple to do), where my mysterious Procurer makes her debut appearance. 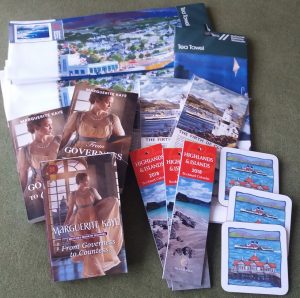 So, on to the launch celebrations. I’m giving away three goody bags around the theme of going ‘doon the watter’ to the Clyde, and my home town of Dunoon. Obviously all the winners will get a signed copy of the book, but there is also a tea towel with a classic railway poster from the Fifties, a Firth of Clyde magnetised notepad, a coaster featuring Dunoon pier and the paddle steamer the Waverley, and a set of book marks in the form of a calendar, with some gorgeous pictures of the Highlands and Islands.

The competition is open to everyone. All you have to do is leave a comment telling me which of the two covers of FROM GOVERNESS TO COUNTESS you prefer (UK on the left at the top of this post, US on the right) and why.

I’ll announce the winners here in a week’s time on the 8th March. Good luck.

62 replies on “From Governess to Countess Release Day and Giveaway”