One of my favourite cycle routes, especially in the evening when I’ve been working all day and want to clear my head, is along the side of the Holy Loch, where I’ve got the choice of heading up to Glen Massan (more on that another time) or around the head of the loch to Kilmun.

When I was growing up, the Holy Loch was dominated by the huge American support ship and the underwater nuclear submarine dock which was part of the US Navy’s base there.  Quite a contrast to how it looks now.

The village of Kilmun and its very atmospheric church sits on the far side of the Holy Loch – in Gaelic, Loch Seanta or charmed loch. There have been three churches built on the site, which may or may not have been the burial place of St Mun or maybe St Mund. (‘Kil’ means church or burying place, and is often used to precede the name of the saint or famous person buried there – hence Kilmun, burial place of St Mun or St Mund.) My grandfather loved the view from the church so much that he was buried there, as is my grandmother and one of her sisters too. My own sister was married there, so I’ve a very personal attachment to the place.

It has a fascinating history too, starting, as most history around Argyll does, with a dispute between the Lamont clan and the Campbells. The Lamonts were the first to establish a church on the land sometime in the Thirteenth Century. In the next century though, King David II officially assigned the land to the Campbells, who then demanded rent from the Lamonts in the form of a pair of Paris gloves a year! The Campbells seem to have been fond of these odd rental payments, they gave the crown a rose a year to lease the nearby Dunoon Castle around about this time.

In the mid-Fifteenth Century, Sir Duncan Campbell of Lochawe had the church established as a Collegiate, which basically meant that there would be monks living on the site who could pray for his son Celestine who was buried there. The tower which you can see on the right-hand side of the current church in this picture housed the monks’ living quarters. Celestine wasn’t supposed to be buried at Kilmun. His body was being transported back to Inveraray, home to the clan Campbell, when the ship was wrecked in a storm on the Holy Loch. When Sir Duncan died he was buried there too, and so began the tradition of the Campbells of Argyll being buried at Kilmun.

In 1646, during the English Civil War (which wasn’t confined to England), the Campbells and the Lamonts once again found themselves on opposing sides. The Lamonts, hunting down their enemy, killed all the poor souls hiding out in the Kilmun Church tower and destroyed the church in the process. The Campbells retaliated later by failing to honour a promise of safe conduct given to the Lamonts, destroying their castle at Toward (another of my favourite cycles), capturing two hundred of their men, and hanging them in what is now Dunoon’s Castle Gardens – thirty-six of them, it’s said, from one tree – like some grotesque parody of Christmas decorations.

Back at Kilmun, in 1688 a new church was created from the remains of the old one and a separate burial area for the Campbells of Argyll established. Alongside several earls who died in battle, there’s Archibald, Marquis of Argyll who was executed for high treason in 1661 in Edinburgh. As a traitor, his head was displayed at the Edinburgh Tolbooth, and wasn’t re-united with his body until three years later. You’d think that his son Archibald (the ninth earl) would have known better than to commit treason, but like his father, he was also executed at Edinburgh, this time for supporting Monmouth’s attempt to oust James II and VII from the throne. He was originally buried elsewhere, but when his son, the tenth earl and first duke, died in London, they dug up the father and buried the pair of them at Kilmun.

The smell coming up from the crypt by this time was apparently overpowering, so the next lot of Campbells were interred in a side chapel. Elizabeth Gunning, one of the notorious and glamorous Gunning sisters, earned the right to be buried there by marrying the fifth duke, after her first husband, the Duke of Hamilton, died (thus earning her the title of ‘Double Duchess’). When she died, in 1790, the Campbell relics were becoming very over-crowded, so the side chapel was pulled down, what is now known as the Argyll Mausoleum was built, and the family moved with their effigies en masse.

A hundred years later, the ninth duke married Louise, Queen Victoria’s most rebellious daughter. It was an unhappy union, the duke rumoured to be gay, the princess rumoured to have taken solace in the arms or her sculpting instructor. However, when the duke died, Louise was devastated. The dowager duchess had requested to be buried by her husband’s side in the mausoleum if she died in Scotland, but passed away in England, so her resting place is near Windsor. The next duke, the tenth, nephew of Louise’s husband, was the last Argyll to be interred in the mausoleum in 1949. 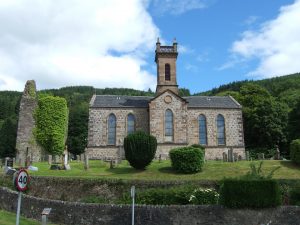 It was the eleventh who duke put an end to the tradition. He was most famous (or notorious) for his third marriage, to Margaret, a society vixen whose list of lovers reads like a who’s who of the stage, screen and Houses of Parliament. The marriage ended up in the divorce courts, the duke himself providing the evidence of her adultery – a photograph he’d taken of the duchess wearing only her pearls in a VERY intimate act with a man who has never yet been identified. Why did he choose not to be buried in Kilmun? Margaret, who spent her formative years in New York, had an American accent. The mausoleum overlooks the Holy Loch which at the time was an American base. Maybe the duke just couldn’t bear the reminder of the scandal which blighted his life.

By the mid-Nineteenth Century, boatloads of people were travelling ‘doon the watter’ from Glasgow to holiday in Dunoon and the surrounding Cowal area. They needed a bigger church to worship in, and so the current church was built.

Elizabeth Blackwell began to holiday in Kilmun from 1902. The first woman to graduate as a doctor in the US, in 1849, she was reputedly the inspiration for the television series, Doctor Quinn, Medicine Woman. Finally permitted to be the first woman entered into the British Medical Register in 1859, Elizabeth was a true pioneer, fighting prejudice from patients and the establishment her entire life, training nurses during the American Civil War, establishing a Woman’s Medical College from which the first black woman to become a doctor graduated. Elizabeth met Florence Nightingale when working at St Bartholomew’s in London, and it was probably Florence, whose aunt lived in nearby Innellan, who recommended Kilmun as a good place for a rest. She must have liked the place, for when she died after a fall on holiday in 1910, she elected not to leave.

And so to come full circle, back to me! Or rather to Marguerite’s writing. I take a lot of inspiration from my wee corner of Scotland. David Napier, who made the boiler for the Comet, the first commercial steamship in Europe, is also buried at Kilmun. Napier was the inspiration for Iain Hunter, my ship-building hero in UNWED AND UNREPENTANT, and he also inspired Innes Drummond, hero of STRANGERS AT THE ALTAR. In that story, engineer Innes goes on to establish his home ‘doon the watter’ on the Isle of Bute as a very posh holiday destination, inspired by my own happy childhood holidays there. But that’s another story.

So there you have it, my first ever local history blog. I’ve really enjoyed writing it. Now it’s over to you – did you enjoy reading it? Too much detail or not enough? What would you like to learn about next?