Today, Mills & Boon reveal the UKs top ten most romantic places, and they are celebrating by releasing ten specially commissioned short stories, one for each location. 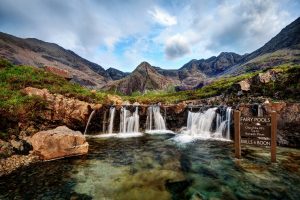 I am absolutely thrilled to have been chosen to write A Scandalous Liaison on Skye, showcasing the amazing Fairy Pools of Glenbrittle. Especially since this just happens to be the place voted the NUMBER ONE most romantic spot. 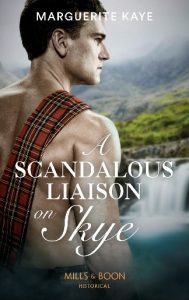 So, what makes for a romantic location? According to Mills & Boon readers, the key factor is spectacular surroundings, and if the top ten romantic places are anything to go by, they often feature water – lakes, lochs, waterfalls and the sea. Given Scotland’s climate (apart from the freak heatwave of the past month!),there’s no shortage of water, but what is it that makes the Fairy Pools so very special?

I thought about this a lot when I was planning my short story. It is a truly beautiful place, there’s no denying that, and the way the Black Cuillin mountains tower over it, creating a natural amphitheatre, gives you a sense of being hidden away from the world, in a very secret place known only to you (unless you go there at the height of summer, of course). This feeling of ‘otherworldliness’ begins with the ferry journey (or the trip across the bridge), quitting the mainland for somewhere very different and physically separate.

On the Cowal Peninsula where I live, and the nearby islands of Bute, Cumbrae and Arran, ferries are a way of life for us locals. We’re used to seeing porpoises and seals swimming alongside – or in my case, right outside my window, which looks onto the Clyde estuary – and it often takes the excited exclamations of visitors to remind us of just how lucky we are to live in such a beautiful place. My Twitter pictures of the local ferry plying back and forth, quite literally at the bottom of my garden, which usually features in my morning weather forecast are always amongst the most liked and re-tweeted of my posts.

So the Fairy Pools have that island castaway attraction. They have the water and the waterfalls. They have the majestic mountain backdrop. But you can find that same combination in other places in the UK, so what makes them stand out? I think part of it is the history associated with the Highlands, the castles, the Clans, the battles which pitted kin against kin. Think of Skye and you think of Flora MacDonald who helped Bonnie Prince Charlie escape after defeat at the Battle of Culloden put paid to his hopes of restoring the Stuarts to the crown, one of Scotland’s most romanticised (and tragic) periods in our history.

But there’s also the mythology, a tradition of selkies and kelpies, of fairies, changelings, bodachs (who foretold the death of a clan member) and bogeymen. There is no specific legend associated with the Fairy Pools, but it’s a place which must surely, at night, be a playground for magical creatures.

Which all adds up to a wonderful place to set a romance. Rory and Sorcha’s story is set in 1746 when the Jacobites were being hunted down by Cumberland’s men. Of course, my hero and heroine’s family were on opposing sides, so their love for each other is doomed from the start. The Fairy Pools is their special trysting place. But Rory is a fugitive and Sorcha is about to be married off. Can they possibly have a happy ever after? Can I possibly have crammed all this into a thousand words? Why not download the story for free and find out!

But A Scandalous Liaison on Skye is far from my first story set in the Highlands. I come back to the places I love time and again in my writing because they are romantic, for the same reasons as the Fairy Pools. My short stories, Spellbound and Seduced, and An Invitation to Pleasure combine a Highland setting and some magic too. My Highland Brides duet have two brothers who, like Rory and Sorcha’s families, fought on opposing sides at Culloden. Legend of the Faol, my paranormal-lite shapeshifter shorts, are set on a mystical Highland island. Strangers at the Altar is set even closer to home, on the Kyles of Bute.

And the setting for my World War One story, Never Forget Me, is Glen Massan, a lovely little place not unlike the Fairy Pools, where I’ve been going swimming since I was wee, where a large country house is requisitioned for war-wounded soldiers, in my story. And though my upcoming December release, A Scandalous Winter Wedding, is set mostly in London, there is a return to a Highland island at the very end that I could not resist including.

Sadly, I won’t be visiting the Fairy Pools this summer, but if the sunshine comes back to Argyll, I’ll probably brace myself for an icy dip in my local Fairy Pools at Glen Massan. I hope I’ve tempted you into reading not only my free read, but all ten of these wonderfully romantic stories by some of Mills & Boon’s favourite authors. Here are the top ten settings:

Does your most romantic place in the UK feature? And if not, what is it? I’d love to know.