The first book in my new Marriage of Convenience quartet, Penniless Brides of Convenience, took me a LOT longer to write than planned. But you’re always saying that, I hear you cry. Don’t you ever learn from your mistakes? Well no, actually. I completely forgot the amount of effort it takes to create a new world for a series, and as a result I was horribly late finishing The Earl’s Countess of Convenience (fortunately I have a very wonderful and patient editor). I then had to rush straight into writing the next book, A Wife Worth Investing In, which is just finished as we speak (big hurrah!). Which left me with very little time for anything other than power-napping, bolting down food and the occasional restorative sherry, the penniless author’s best friend. 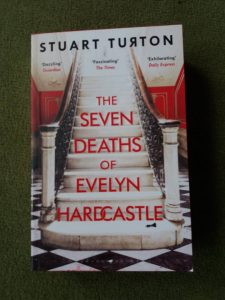 One book I did manage to get through does stand out by a country mile though (I have no idea what that expression means, incidentally). The Seven Deaths of Evelyn Hardcastle by Stuart Turton was a present, and I have to say not a book that I’d have picked myself in a month of Sundays (I do get that one). But I absolutely loved this quite extraordinary first novel.

It’s not often you can say this when you read as much as I do, but this is a book like nothing I’ve ever read before. It’s Agatha Christie with time travel and the game of Cluedo thrown in for good measure, a Gothic whodunnit with so many twists and turns that I often completely lost track of who was what and where – my mind positively boggles trying to imagine how the author plotted it out. It is absolutely not a book to be read in bite sized chunks, but one to be inhaled in a locked room with copious supplies of tea/coffee/wine. In all honesty, I think I’d need to read it again much more slowly to fully understand it, but the actual underlying premise, when I finally ‘got’ it about five pages from the end, is absolutely fantastic.

So often you get to the end of a brilliant read and you’re disappointed with the denouement. Not with this one. I’m not going to say any more. This is the kind of book you simply can’t explain. It was absolutely amazing. Just read it, and you’ll see what I mean. 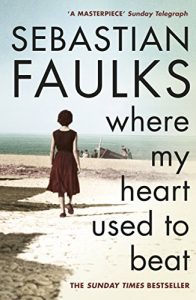 Sebastian Faulks is one of those authors I think I should like more than I actually do. Sadly, I was rather disappointed with Where My Heart Used to Beat. It concerns, as so many of his books do, the effect of war on the main protagonist – this time WWII, though also WWI in his father’s back story.

Robert Hendricks is a man who has lived a hollow life, trying to fill the gaps in his own by helping others as a psychiatrist. His story is tragic, the history heart-wrenching, but it left me oddly cold. I felt the narrator’s emotional absence, I think – I don’t know if this was a deliberate ploy, or whether the writing didn’t emote for me – but the net effect was that his story felt wooden, as if it was being told by someone else (on reflection, given the calibre of Faulks’s writing, this must have been deliberate). For me, the peak emotional scenes in the book consequently fell flat – again, I’m thinking this must have been deliberate, because the narrator closed the emotional door on them, and in fact ran away from them almost before he could assimilate them. There were a plethora of empty rooms in this book, both metaphorical and physical, and there was also, for me, way, way too much exploration of the psyche, discussion of the development of psychoanalysis and the nature of ‘madness’.

I read Human Traces a while back and this felt like Faulks had taken all his research for that and re-used it. I am probably being unfair, but this book simply didn’t gel for me. 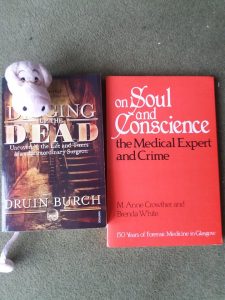 First up in history/research reading pile was Digging Up the Dead by Druin Burch. Before the 1832 Anatomy Act started to provide the many anatomy schools of England and Scotland with an adequate number of bodies, the vast majority of bodies used in dissection were stolen from graves by the resurrection men. The most notorious and recognisable names in bodysnatching were Burke and Hare, who actually never stole a body from a grave at all. This book tells the story of the many other gangs who raided British cemeteries over a period of about a hundred years.

Anatomy in the 18th and 19th centuries was often studied at private medical schools, and students needed bodies. Lots of them. Glasgow University encouraged their students to steal their own bodies, but not surprisingly most students and teachers preferred to pay someone else to do their dirty work. And it was a lucrative profession. It wasn’t illegal to steal a body, only to steal the other, material contents of the grave and the coffin itself, which meant that the punishment by law was ‘light’ – usually a few months incarceration, if you were unlucky, with hard labour thrown in. The people acquiring the bodies were not considered guilty of anything. The outraged, grieving relatives were often left with empty graves and not even the compensation of seeing the people responsible suffer. Extreme measures were taken to protect graves, including trip wire guns, cemetery warden patrols, broken glass-topped high walls, but to no avail.

In the days when on-line shopping would be considered science-fiction, the bodies where ‘shipped’ in crates and barrels and parcels all over the country. An early form of Anatomy Prime, if you like! Reading this book, at times it felt like there can’t have been a mail coach en route somewhere that didn’t carry a noxious-smelling corpse as part of its cargo. This book is full of extraordinary tales of bizarre deliveries, of body snatchers being accidentally buried in the graves they were robbing, of mourners and sextons giving chase and mostly being thwarted, and of bodies abandoned in the weirdest of places awaiting ‘collection’ – including two in a dung heap.

Digging Up the Dead is a macabre book, meticulously researched, but there were a couple of things for me that it lacked. Firstly there was no sense of perspective. How extensive was this crime, how many bodies, and from where – were there areas which weren’t ransacked, for example. Secondly, the focus (not surprisingly, given the title) was entirely on the resurrection men, with only scant mention of the men (always men) who received the bodies and cut them up. I know this is outwith the remit of the book, or perhaps it’s one of those annoying details of history that is utterly undocumented, but I wanted to know how the bodies were ordered, how they were picked up – I wanted to know more about the relationship between buyer and procurer.

But this was a fascinating read. I won’t say enjoyable, the subject matter is too grim, but it definitely put body snatching in a whole new light for me. And I want to know more. 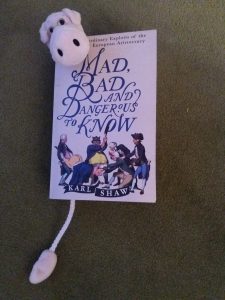 Mad, Bad and Dangerous to Know by Karl Shaw was another present (thank you Alison). I’m a bit torn about this book. It is chock full of the kind of scurrilous stories, shocking scandal, eccentric tales that are grist to my writer’s millstone. I have already incorporated two of the characters into my own work in progress – so research-wise it is a boon. But…

The net effect of reading this is like eating far too much cake. You feel quite sickened by the excess, and you’re really quite happy to get to the end of the feast. Serious wealth and utter arrogance has created a book full of very unlikable, in some cases quite despicable people who don’t give a damn about anyone but themselves. Whether they are burning down houses to clear their land, or forcing their footmen into a race against a carriage and four (the poor servant died in the attempt), they leave a very bad taste in your mouth. Of course the selection is not representative, but there were times when my blood was boiling.

It was excellent research reading. I will definitely be returning to this one, but I think it would be a much better ‘dip in now and then’ kind of read (dare I say, the kind you keep in the loo!) than something to be read as a whole. 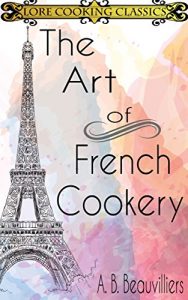 Finally this month, The Art of French Cookery by Antoine Beauvilliers This book was pure research for A Wife Worth Investing In, and I certainly wouldn’t recommend trying out any of the recipes, even if you could source the unusual ingredients. It was a best seller in its day, apparently the ‘go to’ recipe book for every French housewife and every bit as popular in its English translation.

Antoine Beauvilliers was a French chef patron of one of the first and most popular restaurants in Paris, La Grande Tavern de Londres. His cooking was elaborate, the kind of stuff served up to the aristocracy pre-revolution, so fell out of fashion post-revolution. He closed up and wrote this instead.

This is a sort of French pre-cursor to Mrs Beaton, with lots of handy instructions to housewives on how to stock their larder, how to kit out their kitchen, as well as actual recipes. The recipes are certainly extensive but how any French housewife managed them with open fires and no fridges, I have no idea – I can only presume that she spent the day from dawn to dusk in the kitchen, and must have been far too exhausted to eat what she finally served up. A fascinating bit of culinary history which I enjoyed because I like this kind of thing, but I’m not sure where it would sit on anyone else’s book shelves.

If you’ve read any of these books, I’d love to hear your thoughts either here or on my Goodreads review of said book. And if you have any ecommendations, please do share them, I’m always looking for something new.