You’ll be well aware, if you follow me on Facebook, that I recently spent a driech (Scots words meaning grey and wet) week on the Isle of Bute visiting family, doing a bit of writing, hoping a change of scene would get the creative juices flowing, and a lot of walking. There was rain of biblical proportions almost every day, but fortunately I packed in anticipation for that, so it didn’t stop me getting out and enjoying some of the little island’s fantastic scenery, and I’ve come back with some ideas for setting a book there too.

If you’ve never been to Bute, I’d highly recommend you take the opportunity if you can, because there’s something about being on an island that makes you disconnect from the real world really quickly. Let me see if I can tempt you by describing some of my favourite walks from my wet week in June starting with this one, which includes a visit to a beautiful Victorian fernery. 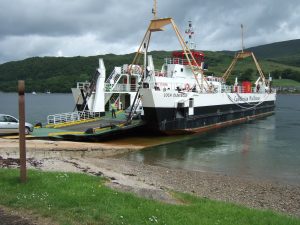 Bute is tucked away on the west coast of Scotland, sheltered by the long arm of the Kintyre Peninsula and the Isle of Arran on one side, and the north Ayrshire coast on the other. You can reach it by means of one of two ferries, the ‘big’ one from Wemyss Bay which is the traditional route for Glaswegians going ‘doon the watter’ on holiday, or the ‘wee’ one from Colintraive, which is not much more than a paddle from the mainland to the island, and the route I took. 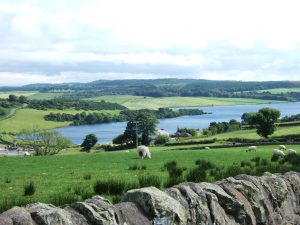 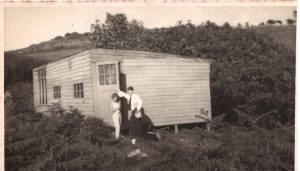 My walk started from the top of Canada Hill, which is part of Rothesay Golf Club, heading down a single-track road past Loch Ascog where, back in the days when my parents first visited Bute, there used to be a little enclave of holiday huts. These huts were made of anything and everything, bits of corrugated iron, old railway sleepers, planks, old doors, whatever people could lay their hands on, and I suppose these days the crude little dwellings would be viewed as inspired upcycling. 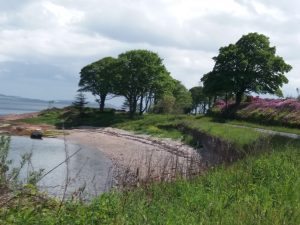 Past Loch Ascog and on down to the coastal road, there’s a little sandy bay where there are almost always seals basking. It seems that seals don’t like the rain any more than I do though, because there were none in sight. Turning left towards the town of Rothesay on the coastal road, you come to the Ascog Hall Gardens and Victorian Fernery. I’ve walked past it dozens of time but had never ventured in before, and I was absolutely entranced. 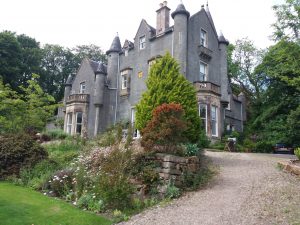 The Secret Garden and Tom’s Midnight Garden are two of my favourite childhood books. I felt like I’d stepped into them – all the more so because for most of the time I was the only visitor. I’ve written an intrepid botanist heroine in The Widow and the Sheikh, and as I wandered around the various gardens, I kept thinking that this is exactly the kind of place she’d have established. 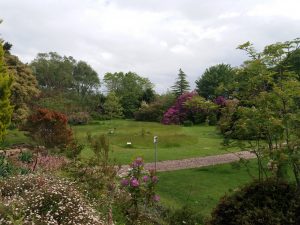 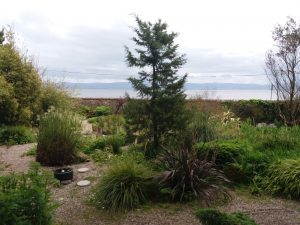 The house itself is privately owned, and there’s an honesty box for the entry fee. The house and gardens were built between 1870 and 1875 as a holiday home for Edward Ballantyne Stuart, a Glaswegian entrepreneur, so presumably not related to the more famous Stuart family on the island, the aristocratic Earls of Bute. The gardens are maintained by volunteers now, and apparently they are struggling to cope, because a few of the places, most notably the rose garden, are sadly neglected. But it is charming nonetheless, and I would love to come back on a sunnier day with a picnic. There are lots of shady nooks and restful, secluded benches, and there’s so much more to explore than just the Fernery. There’s a wild flower meadow with orchids that leads to a gravel garden with a wishing well and water feature. Wandering through a tunnel of greenery past the rose garden, there’s a little pond, with a statue of a girl about to dive in set at the head of it. 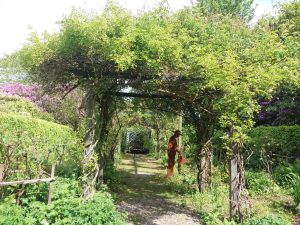 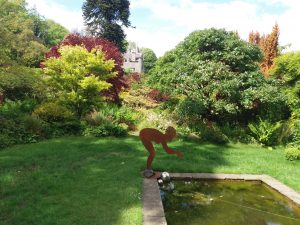 The one-dimensional metal statues are a really quirky feature in the gardens. In the old stables, there’s one of a man holding up an umbrella that turns into a little fountain. I loved the atmospheric old stables, I could just imagine them in their heyday, and I’m definitely going to be using them in a book at some point. 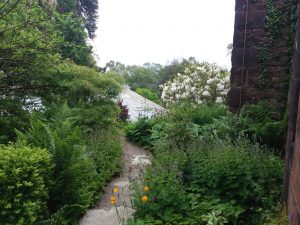 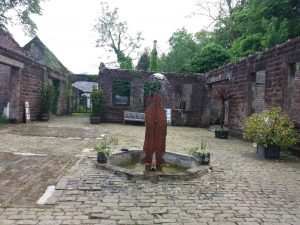 There’s a tunnel of huge ferns at the back of the Fernery, which provided shelter from the rain. The Fernery is actually sunk into the ground, so you enter it as if you’re going into a basement, and emerge into the huge grotto-like area that feels really quite mystical. There’s something quite distinctive about the smell of this kind of glasshouse that I’ve tried to capture a few times. Here’s my attempt from A Governess for Christmas:

As the door closed, a blast of hot humid air hit them, followed by the sweet, earthy smell of the carpet of moss which acted as groundcover for the rare and precious blooms, whose heady, perfumed scent hung in the air like incense in a cathedral. The air was humid, the heat making steam rise from the damped-down floor. 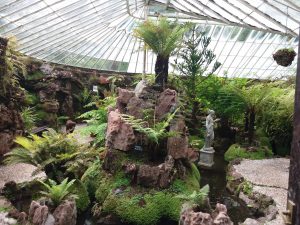 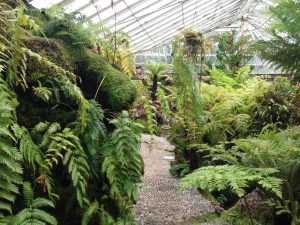 I was actually describing an orchid house and not a fernery, but I think I got it pretty close. There is a King Fern in the collection at Ascog, which is over a hundred years old and apparently the oldest exotic fern in Britain. To be perfectly honest, though I love to look, I’m not one for remembering names or even being too fussed about species of ferns, but there’s a lot more information, if you are interested, on the website at www.ascogfernery.com. 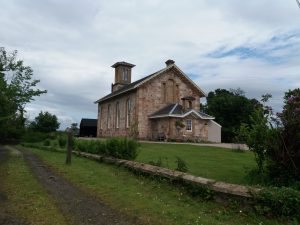 Returning to the coastal road, I continued on past Ascog bay and the church there, which was designed by the architect David Hamilton. I love making historical connections. It turns out David Hamilton was the grandfather of Madeleine Smith, the Glaswegian arsenic poisoner famously the beneficiary of a ‘not proven’ verdict, a uniquely Scottish legal construct. Her reputed victim and lover Pierre Emile L’Angelier lies in the graveyard of Ramshorn Kirk, a stone’s throw away from one of Hamilton’s most beautiful designs, Hutchieson’s Hospital in Ingram Street in Glasgow’s Merchant City. Hamilton also built Toward Castle, just outside Dunoon, and one of my favourite cycles back home, and Hafton Castle, about a kilometre from my house, on the route of another favourite cycle. 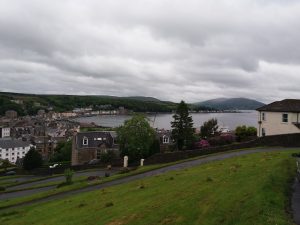 From Ascog, the road runs along to Craigmore Pier, which was one of the many pleasure boat and ferry stops back in the day, but is no longer in use. Then on into the little town of Rothesay, the island’s capital, then back up to Canada Hill via the Serpentine, a series of vertiginous hairpin bends reminiscent of the Swiss Alps in miniature. All in all, about twelve kilometres of walking, I think. As I sat on the deck of my sister’s caravan with a cup of tea (or was it a glass of wine?) I was bedraggled, tired, but extremely happy.