I have to confess that I’ve not read much non-fiction at all lately. My research reading time (which is usually first thing in the morning) has been consumed by my need to get words on the page. My Gothic romance, The Truth Behind their Practical Marriage, was taking up almost every moment of the day, waking and sleeping, at one point. Thankfully it is done now and I’m really pleased with it – and there will be a book page coming here soon regarding it. But because it took so long, I was late starting the last in this Penniless Brides of Convenience quartet, so I still have very little time for reading in the morning. 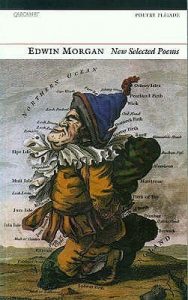 One thing I turn to in times of stress though, is poetry. Sometimes it’s old favourites such as Donne or Eliot, but at the moment, my go-to set me up for the day book is New Selected Poems by Edwin Morgan. I don’t know how I managed to leave it so late to discover Edwin Morgan’s poetry, especially since he was an English Literature lecturer at Glasgow Uni, my alma mater. When I first heard Strawberries read out at a funeral last year, the words of the poem, so evocative, so sensual and so heart-breaking under the circumstances, stayed with me for weeks afterwards. So when I received this compilation as a Christmas present, I was utterly delighted.

The volume covers such an immense variety of poetic styles and themes. There are short vignettes (which Morgan does particularly well) such as The Woman, and In Glasgow. Then there’s his incredibly sensual love poetry which includes Strawberries, and At The Television Set (Take care if you kiss me, you know it doesn’t die!) that leave you breathless and moved and aching.

There are some incredible ‘evocations’ of places, not least Morgan’s native Glasgow of course, but poetic travelogues of Brazil, Provence and the Andes, and quite a lot of anthropomorphic little pieces such as The Apple’s Song, and The Loch Ness Monster’s Song. Afterwards, which is set in the aftermath of Vietnam, is truly haunting and moves me to tears every time I read it (Afterwards, the prostitutes fell on lean times / some took up embroidery / one became a pearl diver and was drowned).

Morgan writes with such a natural sprung rhythm that you can read it ‘properly’ without any effort. He runs words breathlessly together, then stops you in your tracks, punches you in the gut, or tugs at your heartstrings when you suddenly realise – there, that’s the point of this poem. There are strong links with Eliot (he wrote a biography of him) but Morgan isn’t in any way derivative.

Not every single poem in this anthology works for me, you wouldn’t expect that, but most of them do, in so many different ways. I dip in a couple of times a week in the morning, and every time the words and the rhythm and the sentiment stay with me for the rest of the day. 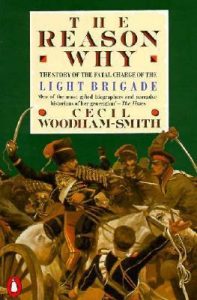 I’m going to be moving into the early Victorian period with my own writing very soon, so I’m embarking (slowly!) on a general catch-up on the period, starting with some books I have already in my collection. I originally bought The Reason Why by Cecil Woodham-Smith way back in the Dark Ages when I was studying 1960’s British films at the Open University, so this is a re-read for me, and in the gap I’ve read a lot more about the Crimean War (principally from Orlando Figes’ The Crimean War). I remember on the first read of Woodham-Smith’s book just how utterly flabbergasted I was by the sheer incompetence, the nerve and the arrogance of Lords Raglan, Lucan and Cardigan. I’d thought Tony Richardson’s brilliant 960s film had exaggerated their ineptitude, but if anything he seriously underplayed it.

Lords Lucan and Cardigan are brothers-in-law who can’t stand each other. They really, really can’t stand each other. They are also military commanders with little or no active service under their belt and an outrageously high self-belief in their ability simply because they are aristocrats. Seriously, you cannot imagine the arrogance of either. Between them they survive numerous court martials and reprimands. They hound men out of their regiments and in Lucan’s case, hound their starving tenants out of their Irish estates, all with not a single twinge of conscience – their word is law. And then along comes the Crimean War, and Lucan is appointed head of the Light and Heavy brigades over Cardigan. Cardigan has a chat with their ultimate commander, Raglan, and comes away convinced that he can do his own thing. Which he then proceeds to do, with calamitous results.

This was a brilliant evocation and explanation of the life and times of the British elite of the army in the run up to the Crimean War. The big question that emerges is why there weren’t more disasters! It would be funny – bits of it are, very darkly funny – were it not so tragic, and were this trio of senior officers not responsible for so many deaths and so much suffering – men starving, dying of thirst, dropping like flies from cholera – it doesn’t bear thinking of. And those same men, in the heat of battle, responded to the iron rod of discipline that their enemies simply couldn’t comprehend, and were forced to admire even while they gazed on gobsmacked at the brave and futile folly.

This isn’t just about the debacle that was the Charge of the Light Brigade, it’s about the debacle that was a British army system out of touch, cruel, and ultimately ineffective. Reform came as a result, huge reform, though too late for too many. It’s a brilliantly evocative read that is for everyone, not just historians. And it’s made me want to go back and watch that film again with a fresh eye. 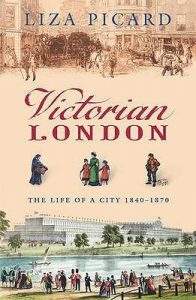 Victorian London, The Tale of a City 1840-1870 Liza Picard was next on my foray into the Victorian world. I wanted a good general history to ease me into the Victorian period, and I’d read two other of Liza Picard’s ‘London’ histories before – Doctor Johnson’s London and Restoration London. Her Victorian London was every bit as good and exactly what I wanted, full of amazing research and recondite facts, nicely divided up into topics you can dip in and out of at will. This is excellently readable and accessible history, with loads of the kind of fun facts you can throw at people – do you know why prison warders were called screws, for example, or did you know that the cello was thought too indecorous an instrument for a Victorian lady to play.

I’d highly recommend any of her books as a sound first step into the city at a particular time period – a sort of jumping off point that gives you a taste for a wide range of subjects and allows you to follow up once you’ve got a solid grounding. Which is what I’ll be doing just as soon as I have managed to get Kate and Daniel to their happy ever after.