One of the biggest challenges, for me, in writing historical romance, is trying to write a strong, independent heroine who sits believably within the historical context. If a genteel woman hasn’t inherited money, then trying to find a realistic way for her to earn her living is really quite difficult. There was no shortage of work for women in the domestic sphere as servants, but what they earned was a pittance. Other work, such as sewing in its various forms or labouring, were similarly appallingly paid, and left no time for any sort of personal life, even if one was permitted.

So I’ve been creative with my heroines. I have one who was forced to resort to the oldest profession, in From Courtesan to Convenient Wife, and in His Rags to Riches Contessa from the same series, the protagonist was a street magician. In Strangers at the Altar, my heroine earned her living as an agony aunt, and another heroine used her quill to pay the bills by writing erotica in Outrageous Confessions of Lady Deborah. A real life historical character provided the inspiration for Cressie, my mathematician heroine in The Beauty Within, who was very loosely modelled on Ada Lovelace. But my Hot Arabian Nights quartet presented a whole new challenge – not only did I have to dream up an occupation for my heroines, it had to be something relevant to the desert setting.

I was determined to turn the sheikh trope on its head, and write four stories that were about being a feisty woman in a male-dominated world, and not focused on the man who did the dominating! But before we discuss the heroines, let’s just talk a little bit about the sheikh in romance land.

My Regency Arabia is a complete fantasy, free from the controversies of religion, imperialism, and world politics which blighted the region in the Nineteenth Century and unfortunately continue to do so to this day. The Arabian setting is a beautiful, other-worldly backdrop for the romance, nothing more. Creating the world was one of the things I absolutely loved about this series. My desert kingdoms are sumptuous, exotic, glamorous, richly-textured and sensual. Writing from my home in Argyll, Scotland where, as anyone following my Twitter feed will know, it rains most days, made the desert landscape even more appealing. As the view from my window assumed one of its many shades of grey, I escaped to the sultry heat of the desert, conjuring up a lush oasis or moving one of my favourite silver-sanded beaches from Scotland to the Arabian coast, where the water is balmy and the sun crystallises the sea-salt on your skin.

The desert landscape is a character in its own right in each of the books in this series, and it casts its spell on each of my heroines, a completely and utterly alien world to the one they have left behind, which beguiles them as much as the men who rule these desert kingdoms do.

However, such fairy tale settings need to be counter-balanced by a healthy dose of reality. My desert princes (and one princess) and their heroines had to be confronted with believable and tangible issues. In a sense, the princes were easier to deal with. There are three things that define the essence of a sheikh in romance-land: they are hugely powerful; they have an all-consuming sense of honour; and they are utterly mysterious. Their inner self, the man beneath the abba cloak and keffiyeh headdress is concealed to all but the heroine. I’ve always loved writing dark heroes, but the wielding of power had never attracted me. So how would it be, I thought, if it didn’t appeal to my sheikhs either? As a result, the first two of my Hot Arabian Nights heroes are very reluctant princes indeed. The third is a victim of his all-powerful position, and in the fourth book I reverse the trope, and my sheikh hero becomes a sheikha heroine.

And so back to my heroines. Who were these women, transported to a land where Lady Hester Stanhope was the only real-life historical traveller to visit the region at the time (1815)? Why were they there? Richard Holmes’ brilliant book, The Age of Wonder, inspired the answer to the latter question. Science! A man’s world, an embryonic discipline in the early Nineteenth Century, but one where women could gain a foothold – though very much against the odds. So Julia, the heroine of the first book in the series, The Widow and the Sheikh, is a botanist. Constance, in The Sheikh’s Mail Order Bride is an astronomer. Stephanie, in The Harlot and the Sheikh, is a veterinarian. And Tahira, the sheikha heroine of Claiming his Desert Princess, is a wannabe archaeologist. Women fighting to establish themselves in a male-only domain – exactly my kind of scenario.

Which is all very well, but was it credible to have three English women roaming the Arabian desert on their own? I’ve mentioned Lady Hester Stanhope, who I first encountered researching Innocent in the Sheikh’s Harem. After a bit of digging, I discovered there were a few other pioneers: the scandalous Jane Digby, whose fourth husband was a sheikh; Lady Anne Blunt, who came to Arabia in search of bloodstock for her stud farm; the much-travelled diplomat Gertrude Bell; and Isobel Burton, wife of the explorer Richard. Admittedly all visited Arabia later than my heroines, but sometimes you have to take the occasional historical liberty for the sake of a good tale. (You can read more about my research for this series here.)

Freedom in the form of independence is the goal which links my heroines, and it’s ironic that they have to travel half-way across the world to achieve it. Of course it’s stretching credibility on the one hand, but on the other, as my research proved, there were exceptional 19th century women, unconventional women who did stretch credibility, and I like to think my heroines are capable of similar feats.

Of course my heroines don’t just, quite literally find themselves in Arabia, they find love too. The desert sings a siren song that allows them to cast off their inhibitions and lose themselves in this sensual world, and in the embrace of the sensual men with irresistible appeal and dark secrets who rule there.

I thoroughly enjoyed writing this series and have picked up some seriously eclectic knowledge along the way, from how to birth a foal suffering from carpal flex (its poor wee hooves bent back preventing it from being delivered) to the location of Perseus in the night sky, and the history of the Royal Horticultural Society.

I hope I’ve intrigued you enough to persuade you to try a sheikh romance. And the good news is that, if you’re in the UK, you can download The Widow and the Sheikh from Amazon for a limited period for just 99p. Enjoy! 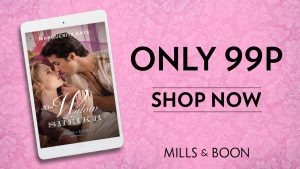